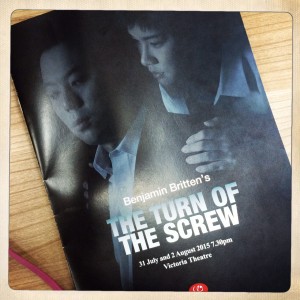 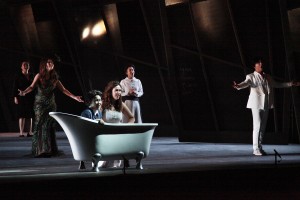 This stunning, yet intimate production of ‘The Turn of the Screw’ by the New Opera Singapore company showed how operas needn’t be the usual elaborate Verdian and Puccinian affairs to be successful. Benjamin Britten’s chamber opera, of course, lends itself to this sort of treatment, requiring just seven vocal soloists, plus 14 musicians in the pit to tell the story of a troubled governess hired to care for two children, Miles and Flora, on condition that she is not to contact their uncle. She finds out in due course that two ghosts haunt the children. Or does she?

Sets were simple but effective in this production, with its designer eschewing 1950s England for a more modern feel, with props such as furniture brought in by the prologue tenor and the driver. The Bly home was represented by tall symmetrical panels creating successive triangles and the large mirrored window panels on both further gave the illusion of an endlessly telescoping kaleidoscope, creating a cold, yet intensely claustrophobic effect. Scrims separating one layer of the house from another created spaces and divided scenes from each other as well, rather effectively.

Musically, this production was spot-on, with firm direction from conductor Chan Wei Shing and his band, among whom were such stalwarts in the Singapore music scene as Katryna Tan on the harp and Lim Shue Churn on the violin, with hardly any weak links to be found. The winds, in particular, rose to the occasion in their demanding parts, evoking loss and beauty over Britten’s haunting, musical dreamscape. The musical interludes were particularly well-managed and advanced the action as well as set the mood for the scenes following them. The soloists, too, were excellent, with lyric soprano Teng Xiang Ting a radiant, young-sounding governess with a lovely top who managed to evoke wonder and ecstasy in her role, with some lovely acting with her hands, though not as much psychological fragility, and Rebecca Li a declamatory Mrs Grose, with much sympathetic chemistry between them. 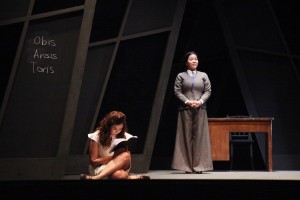 The Governess and Flora

There were issues with the drama elsewhere. The meaning of the original Henry James novella has been hotly debated – are there truly ghosts or is the governess simply seeing things, causing distress to the children and leading to the death of the boy Miles? Britten’s opera did not clarify this, but this production left little doubt, with the ghosts making themselves felt, sometimes to (possibly unintended) comedic effect. David Charles Tay hammed it up as a fairly unghostly (think Peter Pears) Quint in a white suit, conjuring to mind a one-trick magician, guaranteed not to scare anyone. Yujim Kim was a rather glamourous-looking and chocolatey-voiced Miss Jessel in lovely voice.  In some interpretations (and, it is said, in Henry James’ original), the ghosts are understood to be child-abusers, here, this was less evident – perhaps direction so that more menace was portrayed would have been more appropriate.

The central theme that ‘the ceremony of innocence is drowned’ relies on the audience’s belief that the ghosts are a corrupting force as well as that the innocent children are corruptible. Despite their clear, strong voices, the employment of an adult (Moira Loh) as Flora and a female (Ashley Chua, now at the School of the Arts), both taller than their adult counterparts, played havoc visually, and made their shenanigans in ‘Tom, Tom the Piper’s Son’ feel odd, with Flora’s outbursts coming across more petulant than understandably childlike. In the role of Miles, the vocal frailty of a boy treble is not always a liability, as it lends to the innocence of the character. Ashley Chua’s slightly boyish voice made up for this with a greater vocal resilience, which came through in passages such as the famous ‘Malo, malo’.

Taken as a production, this performance was an unqualified success, with excellent musical contributions from everyone involved, and everyone working well together to create a gripping theatrical experience. Even with the above reservations, this was a production which surprised in its general maturity, given that New Opera Singapore is all of four years old. Where will they go next? I don’t know, but this production has made me excited to find out.