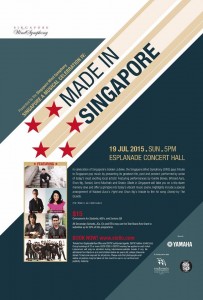 Virtually every musical group has taken advantage of Singapore’s upcoming 50th birthday to jump on the “SG50” bandwagon and cement their place in the nation’s burgeoning music scene. The difference with Adrian Tan and the Singapore Wind Symphony (SWS) is that they have been championing Singaporean music for a few years now. In fact, this is the fourth consecutive year that the SWS is presenting ‘Singapore A Musical Celebration’, a series that started in 2012 with patriotic community songs arranged by local composers. Subsequent installments moved through the music of two Singaporean icons: “Mad Chinaman” Dick Lee (2013) and “King of Swing” Jeremy Monteiro (2014). This year, Adrian pulled out all the stops and featured everyone in the local music scene, making this evening truly a celebration of Singaporean talent.

The concert opened with a new arrangement of the classic “Singapura” which, according to Adrian’s diligent and exhaustive research, was debuted in the 1960’s by Sandra Reemer. Arranger Danial Ariffin added chinoiserie and kitsch to the familiar tune, befitting the style of that era. The Swinging Sixties were referenced frequently in the programme: it was then that Singapore’s own music scene really took off, and Adrian and the SWS paid tribute to home-grown music acts like The Thunderbirds, The Crescendos, and Shirley Nair, in “Greatest Hits of the Tea Dance”, referencing a popular weekly social event that decade, where young people of both sexes were allowed to openly mingle and date, under the guise of social dancing to a live band. As the SWS swung into the heat of things, a gray-haired couple in the audience was seen bobbing their heads, probably reminiscing about their first date at a tea dance! 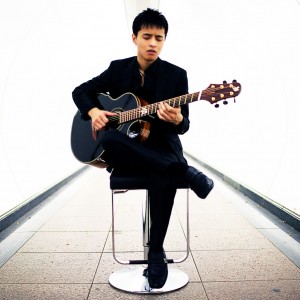 Another home-grown act, The Quests, was one of the first Singaporean groups given a recording contract by EMI. They shot to stardom in 1964 with the song “Shanty”, which displaced The Beatles from top of the local charts and stayed there for twelve weeks. In its current incarnation as a concerto for guitar and band, “Shanty” was given a boppy extroverted treatment by guitarist Shun Ng (right), whose snazzy cadenza had me on the edge of my seat. Ng, whose performance style has won rave reviews from American audiences, including accolades from none other than Quincy Jones himself, then played his own composition, “Boogie Baby”, in classic rock and blues style, heavy on riffs and finger-picking.

Other home-grown talents who have, or are set to, make it big on the music scene, were also featured. Winner of Vasantham Star 2005 Shabir was probably the most veteran name on the line-up, belting out his composition “Singai Naadu” (2012) which has become a new hit Tamil-language National Day song. Indie singer-songwriter Joel Tan, who goes by the moniker ‘Gentle Bones’ with a large following on social media, gave a pensive rendition of his song “Save Me’, while another talent contest winner Sezairi, who won Singapore Idol in 2009, lent his rich vocals to the evocative “Ibu” (‘Mother’) by the late P. Ramlee. His own “Empty”, detailing how a person feels empty when someone he loves with all his heart leaves, was filled with heartache and rue. Gregory Gu Wei’s arrangement for band was suitably angst-ridden and unsettled, with shifting woodwinds hanging above an absent bass. 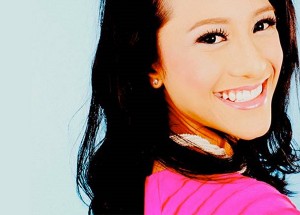 Yet another rising star is Amni Musfirah (left), who at only twenty years old sang for the opening and closing ceremonies of the Asian Youth Games in 2009 and the Youth Olympic Games in 2010. Her waif-like physique has a surprisingly big voice, proving her ability to carry off the most heartrending tunes: ChildAid theme song “A World To Imagine” by the late Iskandar Ismail, and “Tribute to Yusnor Ef”, a medley of three songs that the elder cikgu (teacher) had penned the lyrics to. If your impression of Malay songs is limited to recordings played during Malay weddings at void decks, then you would be blown out of your mind by Musfirah’s powerful and seductive vocals.

Adrian and the SWS also paid tribute to the greats of Singapore music, who have made their names locally and internationally. “A Tribute to Corrinne May” was given a gentle, reverential treatment by arranger Darren Sng, and “Chinese Pop Medley” featured the songs of Kit Chan, Stephanie Sun, and JJ Lin. Dick Lee’s new song for this year’s National Day, “Our Singapore”, became a starry affair with all four young artistes Amni Musfirah, Sezairi, Shun Ng and Gentle Bones joining the SWS in a heart-on-sleeve performance.

The last musical act to be introduced was Wicked Aura, a batucada ensemble based on Afro-Brazilian rhythms infused with pop and funk, and a Singaporean accent. They have thrilled audiences worldwide and shared festival bills with bands like Beastie Boys and Black Eyed Peas, yet have yet to attain the presence they deserve on the local music radar. Their song “Fight” radiated pure energy with its complex rhythm, and it palpably revved up the audience’s spirits towards the end of a heavy programme. 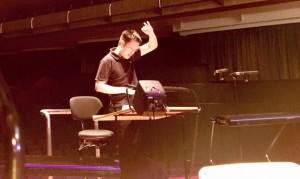 No review of a concert of Singaporean music with Adrian Tan (right) is complete without mention of his veritable stable of composer-arrangers, a group affectionately referred to as the ‘Third Generation’ of Singaporean composers. Even as the likes of Benjamin Yeo, Terrence Wong, Jinjun Lee, Gregory Gu Wei, and Danial Ariffin had been commissioned to write and arrange music for past SWS concerts, it is really this year’s music that has them writing with direction and confidence, each having found his own voice and niche. The band was never overpowering nor set apart, but became an organic and integral part of the song, melding with the soloist seamlessly under Adrian’s adroit direction. Jinjun Lee’s inspired reworking of “Shanty” and arrangement of Shun Ng’s “Boogie Baby” were particularly enjoyable, and Danial Ariffin’s knowledge of the Malay musical idiom no doubt contributed to a stunning “Tribute to Yusnor Ef”. SWS flautist Mohd Rasull is not often credited as an arranger, but his closet percussion abilities makes the arrangement of “Fight” a must-have for any percussion ensemble, or any band looking to spice up their concerts, for that matter.

In the middle of this superlative gathering of Singapore’s musical sons and daughters, is a visionary and a group that has earned every right to be called one themselves: Adrian Tan and the Singapore Wind Symphony. Serving often as ringleader for young Singaporean composers and musicians, Adrian knows that there can be no music without people. Whether it is playing music that Singaporeans grew up with, or giving candid revelations about performers’ love lives, or even singing a birthday song for Joel Tan’s mum from the stage, Adrian has never kept a distance from the man in the street (or audience). Music is intertwined intimately with humanity, and ‘Singaporean music’ is not simply a phase or a byword: it is part of our history and heritage, and it is up to us as Singaporeans to appreciate it, preserve it, and to build on it and be proud of it. We have reached SG50, and hopefully there will be even greater cause to celebrate Singaporean music at SG100!