2Cellos – On the Road 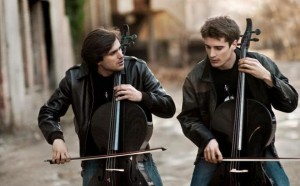 2Cellos on the Road – Live in Singapore

Though classically trained at the Academy of Music (Zagreb), ‘2Cellos’, comprising of cellists Croatian-Slovenian Luka Šulić (right) and Croatian Stjepan Hauser (left), made sure to emphasize right at the start that this was anything but a classical music concert, and that we were allowed to get up, dance and take photos or videos, which the audience duly did.

Centred on the stage with visualizations and short video clips serving as a backdrop, and with video cameras providing live feeds to enlarged projections on either side of the stage, the duo both played electric cellos, taking the audience through arrangements of songs such as Guns N’ Roses’ ‘Welcome to the Jungle’, Michael Jackson’s ‘Smooth Criminal’, U2’s ‘With or Without You’, AC/DC’s ‘Highway to Hell’, The Monotones’ ‘The Book of Love’, Coldplay’s ‘Viva la Vida’ and more.

Much of the concert relied on the electrical distortions on the instrument – if you closed your eyes in parts, you’d swear that you were listening to the growl of an electric guitar. This came off rather better in the rock selections, mainly the AC/DC songs, than elsewhere, with Hauser playing the cello in a standing position, emphasizing the raw sexuality of the instrument. The younger member of the duo, the fresh-faced Luka Šulić, 27, was less theatrical with his contributions but hardly less proficient.

While the duo’s raw energy was infectious and Stjepan Hauser’s husky baritone thrilled the ladies, the musical values were more questionable, with ‘Smooth Criminal’, for example, suffering from a lack of a stable rhythm which made it feel distant from the iconic riffs of the original. The addition of the drummer mid-way through the concert provided a much-needed base on which the duo could extemporize.

Given the classical chops of each musician (Šulić won the 2009 Witold Lutoslawski International Cello Competition with the Schumann Cello Concerto, and Hauser is reported to have studied with Rostropovich and Heinrich Schiff), it was a pity that at no time did an acoustic (read: normal) cello make an appearance, however the duo ended the concert with a performance of the ‘Air’ from Bach’s Orchestral Suite No.3 as an encore, a musical performance which, despite the rubato, was enjoyable. The audience, especially the young ones, seemed to enjoy themselves, and if this duo inspires them to take up the instrument, all the more power to 2Cellos.