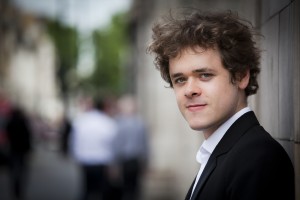 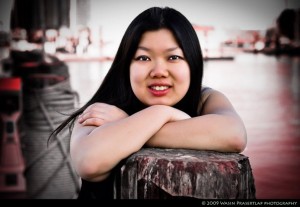 Although Singaporean contemporary composer Emily Koh (right) describes her work, Jia[k], as incorporating ‘the interweaving of different sonic fragments that portray the ordered chaos at a hawker centre, and the garbled noises of one’s mouth chewing on a delicious plate of char kuay’, one would search in vain for anything resembling the everyday cacophony of hawkers plying their trade.

Scored for piccolo, flute, 2 Oboes, 2 Clarinets, 2 Bassoons (the second doubling on contrabassoon), 2 Horns, 2 Trumpets, Trombone, Bass Trombone, 2 Percussions (Vibraphone, Xylophone, Tam tam, Triangle, Whip, Crotales, Glock, Bass drum, cymbals) and Strings, the musical language does not adhere to tonality but comes across as fragmented and somewhat reminiscent of impressionism in its often sparse orchestration, despite the instruments used. Strings were sometimes used atypically, with more pizzicato and col legno than bowed. Twice, the contrabassoon was asked to play in its lowest regions, to reliably great effect.

There were several obligato parts, including horn and one for double bass (Emily Koh’s own instrument) played mainly pizzicato, making it sound like something right out of the Second Viennese School. Perhaps more listening is needed to fully appreciate this ten-minute piece. Okko Kamu led the orchestra in his trademark effective, undemonstrative way, but perhaps in this piece more drama and confidence would have helped better realised its potential.

Bartok’s challenging Divertimento followed and immediately made its mark. A weighty, more moderate pace to the music in the outer movements emphasized its earthy qualities and warmth over the more fleet, laser-like approach that the likes of Boulez or Kocsis might have taken, but the middle slow movement made its emotional mark. Kamu took a more single-breathed view of the work, instead of agogic tempo changes that another conductor might have taken.

The highlight of the evening was also its title – ‘Benjamin Grosvenor plays Liszt’. Here the orchestra played splendidly, with Ng Pei-Sian’s plangent cello making its mark. The 23 year old English pianist made short work of the rippling arpeggios, octaves and soliloquys written by the Hungarian, with a lovely touch that made the piano sing. A musician’s musician, he often looked toward the orchestra and conductor, creating a chamber-music like feel to the proceedings. To that end it exposed a different side of the concerto. But Liszt was after all a charmer of a pianist – he made women swoon in his concerts and the best performances, to me, are the big boned ones, unabashedly revelling in the virtuosic opportunities and quasi-improvisatory opportunities of the (quasi) cadenzas linking section to section. While Liszt has gone a long way from the rehabilitation of his image from that of a bombastic, virtuoso show-off, there are sections I feel that the pianist could really have broken out, having amply shown that he was able to make music with the orchestra in other passages. To be too reticent would be to deny an essential characteristic of the composer. Grosvenor did not play an encore tonight. 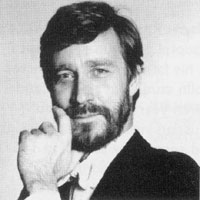 Okko Kamu (right) and the SSO played Schubert’s Fourth Symphony ‘Tragic’ to close the night. Taken as a big-band interpretation, it was well-played and middle-of-the-road performance with well-chosen tempi and solid music making, emphasizing the grace and Sturm-und-Drang where appropriate.

However, I wonder if a more fleet-footed rendition and cutting the strings would have suited the Victoria Concert Hall more. Since reopening, muddiness has been a problem which the hall has been trying to remedy. Better slightly more reverberant than Singapore Conference Hall -like acoustics where the notes drop dead after production, but this very warm, echoey sound, while pleasant to listen to in vocal music, makes the music sound more opaque than it should be in large orchestral pieces.

More judicious tweaking needs to be done to do justice to future orchestra performances in this historic hall.