Review by Derek Lim
Great movies are rare, great soundtracks even more so. Programming an all-movie soundtrack concert sounds easy on paper, but in practice it is often terribly difficult to pull off. Modern scores are difficult and the audience’s relative familiarity with the music means that sky-high expectations frequently are not met. Throw in the challenge of characterising each piece and the Orchestra of the Music-Makers had its work cut out for it.
First, a coup de théâtre, as the orchestra sprang a surprise, launching into Edgard Varese’s fairly ridiculously slapstick ‘Tuning Up’ with gusto, led by leader Edward Tan. It took the unsuspecting audience a few moments to realise that it wasn’t any ordinary tuning up, (probably when the sirens came in), before conductor Joshua Tan Kang Ming made his appearance in the final held chord, timing the applause perfectly. 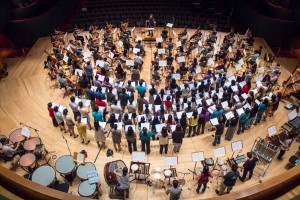 Off to a fine start, then. John Williams rightly made his mark on the evening, beginning with the Star Wars Main Title, played with youthful enthusiasm, though with less finesse than we’ve come to expect from this orchestra. The brass were especially not on their best form tonight – perhaps a result of their having to play so much music, and in nearly every piece.Also making their presence felt was the technically excellent and confident Vocal Associates Festival and Children’s Choir, who appeared so often that they could arguably have been given equal billing with the orchestra.  They made their mark in the Sanskrit lyrics of ‘Duel of the Fates’, going on to charm the ears in the two Christmassy ‘Home Alone’ excerpts and were just as persuasive in the droll Latin lyrics of Howard Goodall’s mock-serious ‘Ecce Homo’ from Mr Bean (look them up for a good laugh). Less convincing was their appearance in the ‘Lion King’ Suite, where its traditional choral sound sat at odds with the more ‘pop’ sound of the familiar Disney version – not at all their fault.

The OMM themselves fared best in the (now) more contemporary – the edgy music of the ‘Sherlock’ Suite where frisson made the music brood and sparkle alternately, clearly enjoying themselves – perhaps reflecting their familiarity with the TV score. How to Train Your Dragon as well as the concise, yet thoroughly lovable ‘Totoro’ Suite came off very nicely, with Tan’s always clear, demonstrative conducting a joy to watch. In contrast, the James Bond theme lacked swagger.

If there were overall some moments of problematic balance, slightly slack ensemble, especially in the busier moments of the ‘Fellowship of the Ring’ Suite and Independence Day End Credits, these were more than mitigated by the sheer vigour that came through elsewhere. As Joshua Tan brought the concert to its close with three encores – the cheerfully whistling Colonel Bogey March (from Bridge of the River Kwai), ‘Dragon Racing’ from How to Train Your Dragon 2 and a stunningly breathless, incredibly atmospheric repeat performance of the Duel of the Fates, the OMM demonstrated just how exciting movie music can be ‘live’ – certainly not inferior or less challenging than anything Stravinsky ever wrote and indeed deserves its place as the classical music of now and the future.