Risk-taking is part and parcel of music-making, and this recital demonstrated that sometimes things can go either way. 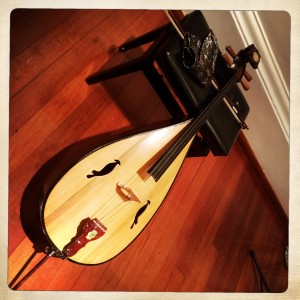 While ostensibly a cello recital, Brandon Voo‘s use of the odd piece of musical history, the viole de paquin (so christened by Voo as it lacked a Western name, see photo, right), originally known as the paqin, a cross between the Chinese pipa and the cello, meant that in fact two instruments were being showcased – hence the ‘Asian Arpeggione’ in the title. As Voo explained to me after the concert, he picked up the instrument, originally made by luthier Zhang Longxiang, from the Shanghai Number One Factory of Ethnic Musical Instruments in the early 1980s as an ethnic-Chinese-looking replacement for the cello, from a local instrument shop at a steal just a few months ago.

Despite its lovely low notes and unique, penetrating sound, Voo’s decision to take a chance with his relative unfamiliarity with this instrument proved the undoing of this rendition of the Schubert. The cellist chose to employ open strings in many places, in line with the concept of a historical instrument performance, though this was in reality anything but. Possibly because of the distance between the fingerboard and the strings, many notes failed to sound as they should and wolf tones abounded; furthermore, intonation issues, especially in position changes, made it difficult to enjoy. Voo’s playing was better in the long lyrical passages of the second movement than in the quick figurations of the outer movements; I felt that he was fighting the instrument in some ways rather than trying to accommodate it. Perhaps a slower overall tempo would have helped. His partner, Lin Xiu Min, provided a dutiful partnership with little opportunity to show off his pianism.

This was to be found in abundance in the very difficult Rachmaninoff sonata, where the duo’s fiery journey through the dark corners of the composer’s mind found both in top form, even unexpectedly so, for audience members who had only made their acquaintance with Voo’s playing this evening. Lin’s command of Rachmaninoff’s idiom, and many, many notes, proved a perfect foil for his partner’s passionate, if sometimes slightly breathless approach to the music. His familiarity with his own cello made all the difference, with mostly perfect intonation and so much more beautiful tone. Music-making felt wonderfully alive and in the numerous lyrical passages, absolutely lovely, with an ebb and flow not found in the Schubert, all leading up to a breathless first movement coda. The fast-ish tempo of the Allegretto scherzando made for much excitement in this very rhythmic movement, eschewing the quieter, more introvert moments for extrovert virtuosity. Given the approach taken to the first two movements, it wasn’t surprising that the Andante, often played on its own as a stand-alone encore piece, was given a less sentimental, more clear-eyed reading. I feel a slightly more measured tempo would have conveyed a greater sense of melancholy and isolation, and made the celebratory last movement Allegro mosso a harder-won victory, but sparks flew between the duo as they tore into the music at a breathless pace, bringing it to its conclusion with captivating urgency. In spite of my earlier reservations, it was a most promising first full recital by this duo, and I look forward to future collaborations between them.