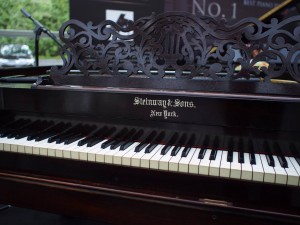 5 to 14 September 2014 is an important week for piano geeks in Singapore: Steinway is exhibiting three historic Steinway pianos at the National Museum of Singapore, which visitors can not only view, but play on as well! The oldest model on display is the very first grand piano that Heinrich Engelhard Steinweg (who later Americanised his name to Henry E. Steinway when he migrated to America) built in his own kitchen in Germany in 1836. Of course, the original instrument is now kept in a New York showroom, but the piano on display here is a faithful replica — down to the very type of wood used for each minute component, and the leather hammers — produced by Flemish piano builder and dealer Chris Maene in 2006. The other two historical pianos are the “Wagner piano”, similar to one presented to the composer Richard Wagner in 1876, and a square piano from around the same period. Rounding up the exhibition is a modern-day concert grand Model B (B-211), a 6’11” piano that is popular for showrooms, studios, hotel lounges and small stages.

For this special week, Steinway has invited British pianist and Steinway artist Simon Mulligan to give a series of recitals, talks and masterclasses on these pianos. Most of these are “special invite” and “private” occasions, and only two concerts are open for ticketing to public: tonight’s recital by Simon Mulligan, as well as an “All-Star” concert on 11 September with young prodigies on stage. On 11 September, there is a pre-concert talk by Dr Katherine Wallace, founding president of the Richard Wagner Association (Singapore) and Assistant Professor at the Yong Siew Toh Conservatory of Music. Interested members of the public are advised to get their tickets early, because seating is very limited! 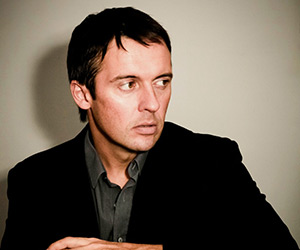 Simon Mulligan (right) opened the recital with Schumann’s Abegg Variations, written for “a countess who did not love him back, but he was smitten with her anyway”, explained the pianist. Even though the concert was billed as a “Recital/Lecture”, Mulligan kept to short one-liner anecdotes like the one above, going light on the technical aspects of the historic pianos, perhaps sensing that most of the audience were there to “hear a nice Steinway” rather than attend a lecture on 19th-century pianomaking. For example, the Schumann Op.1 was played on the Steinway No.1, which is an exact replica of the first grand piano that Heinrich Steinweg built (also called the “kitchen piano”). He had to build it secretly in his own kitchen because he was trained as a cabinetmaker and doubled up as an organ and musical instrument repairer, but Guild regulations of the time did not allow him to build brand-new pianos. As opposed to a modern Steinway or any other modern grand piano, the six-octave piano has no cast-iron frame, built in the Biedermeier style with a case of Cuban mahogany and shellac polish. It has a spruce soundboard and various other parts in maple, beech, and pearwood. The hammers are made of linden wood covered with leather, and the 73 keys are capped with bone (white) and ebony (black), with a Viennese action. The strings are made of iron except the 15 lowest of yellow brass, and straight-strung with three strings per note. (The modern design of cross- or over-stringing to extend the bass notes and to take advantage of string resonance, was later patented in the United States by his son Henry Steinway Jr in 1859.) Even though this was essentially a fortepiano built in the Viennese tradition, it has a stronger construction with thicker strings and larger hammer heads, and its 212cm length is comparable to the bigger concert grands of the period. As was already evident from this first piano, Steinway’s objective — that has remained the same to this day — is “to build the best piano possible”.

Comparatively, the sound of the No.1 model is ahead of its time, being much closer to the historic Pleyels and Erards than to the antique fortepianos. Unfortunately, here modern technology has unnecessarily detracted from the “historical” experience, in my opinion. Steinway decided to amplify the piano with a single microphone close to the strings, a common practice for, say, pop concerts. On the No.1, the bass and middle registers were muddled and the treble was picked up as tinkly keys, with none of the singing tone that is supposedly the draw of early pianos. To be fair, playing the Viennese action must have felt different from playing on a modern grand, and Mulligan seemed to strain at the heavier passages, hindered by a “boomy” bass.

The Mendelssohn variations were played on the “Wagner” piano, and this fared much better. The actual piano presented to Richard Wagner now sits in the Wagner Museum in Bayreuth, Germany, and has 85 keys with a 3-piece rim (among the last of the Steinway grands to be built with a composite rim; later pianos were built using a continuous bent-rim method with the inner and outer rims constructed in one piece). The piano exhibited here — also affectionately called the “Wagner piano” in deference to the similar construction style — is an early forerunner of the modern Model D concert grand. At just 8’4”, it features a composite rim, ¾ size iron plate with an open-face pinblock, Duplex scaling, and 88 keys. Indeed, Mulligan revealed that he himself has an 1891 Steinway model D back in New York! Perhaps because of this, he seemed most at ease playing on the Wagner piano out of all four. The voices sang independently, and the bass was crisp and clear without being dry. Based on this performance alone, one can see why Mendelssohn was such an exalted composer for the piano, and Mulligan brought out the budding romanticism without overdoing the drama.

Next was presented a square piano made in 1880. Heinrich Steinweg reportedly gave his bride Julianne a square piano (on hindsight it would have been a fortepiano) as a gift for their wedding in 1825, but that particular piano has never been recovered. This exhibited model hails from a later date, when pianobuilding has become more advanced and square pianos have started to become popular in American homes. The sound of a square piano is close to that of an upright — both have very short strings and are enclosed in a rectangular box (Mulligan noted that it is really not a square) — but with even less projection due to a smaller soundboard, and a much limited keyboard range. This was a piano for smaller drawing rooms and intimate performances, and its small compact size was designed for this purpose. Unfortunately for the performance, the microphone for this piano had slipped onto the strings, and the resulting rattling required Mulligan to re-start the piece after adjusting the equipment. The choice of Brahm’s Intermezzo in A was perfect for this piano, but as I had noted with the No. 1, there might be some difficulties with using a delicate touch on an old piano, and some of the finest nuances of the Intermezzo were lost, not necessarily due to any shortfall of the pianist.

Finally, Mulligan played on a modern Steinway grand Model B; Gershwin’s Rhapsody In Blue that he had arranged himself, combining both piano and orchestral parts. While the exuberance of this piece would tempt a pianist to go overboard on theatrics and jazzy virtuosity, Mulligan stuck to a more straightforward approach, preferring a certain British understatedness rather than wild oom-pah, and delivered a clean and sleek performance. There is not much unsaid about a modern Steinway concert grand — but perhaps I am more used to hearing a nine-foot concert grand, so I felt that the resonance of this piano was rather dry. Chopin’s Grande Valse Brillante was played on this piano as well, and the clipping of the third beat felt slightly jarring.

For Chopin’s Nocturne in D-flat minor, Mulligan offered the audience the choice of hearing it played on any of the four pianos. The audience voted for the “Wagner” piano, so it seems it was not just me who felt that the music sounded best on that piano. Another glitch with the microphone’s feedback compelled Mulligan to to call, midway through the piece, for the microphones to be switched off altogether. It turned out to be a blessing in disguise. Perhaps no longer feeling the conscious urge to under-play to compensate for the amplifying, Mulligan put his muscle behind the keys and launched into a much more lyrical performance with a beautiful bel canto tone . Now, I wondered how much of the sometimes placid playing that had gone before, was due to him holding back!

Beethoven’s ‘Appassionata’ Sonata was the final piece for the evening, and Mulligan pulled out the stops on the “Wagner” piano, now that his playing had finally warmed up to give the Beethoven a thundering excursion. This was a drier rendition than most people would be accustomed to — the resonance of the “Wagner” piano cannot compare with that of a modern-day Model D — but as a historic-piano performance, this was as good as any you can get in Singapore.

All in all, the recital was an educational experience for piano geeks and music connoisseurs, and a chance for Steinway & Sons to pay homage to its rich and varied history. The concept of the exhibit was especially laudable, for there is not much opportunity for the Singapore public to appreciate historical pianos in person. Just a humble suggestion to Steinway: even though there is a natural fear that these old pianos cannot project far, the recital was held in a quiet glass atrium with the audience seated right in front of the pianos, so I do not think there should be any problem even if the pianos were not amplified. Please, do without the microphones next time?

**EDIT: this review has been revised with kind assistance from Mr James Ledgerwood of Steinway & Sons, Hamburg, Germany.

See more exclusive photos on https://www.facebook.com/flyinginkpotclassical?fref=photo  Don’t forget to ‘Like’ us!