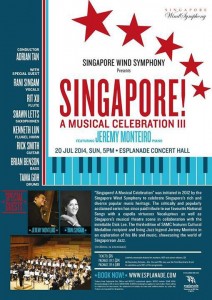 Mentioning “Singapore”, “jazz” and “band” in the same sentence often brings to mind the image of a “combo band”: a small jazz ensemble of keyboard, bass and drums with optional soloists, popular in bars and lounges in the eighties and nineties. This evening promised to blow away that stereotype: the Singapore Wind Symphony (SWS) under music director Adrian Tan featured local jazz works arranged specifically for the larger and heavier symphonic band.

“Singapore! A Musical Celebration” was started in 2012 to showcase local composers using the wind band medium. Spearheaded by Tan, who has been instrumental in the championing of local musicians and composers, the concert series has really outdone itself in this third instalment. Not only is the SWS playing music written by Singapore’s own “King of Swing” Jeremy Monteiro, the band is also sharing the stage with the jazzman himself and his musical partners. To add icing to the cake, Tan has gotten nine local composers from different musical backgrounds to arrange the jazz repertoire for wind band. It is by no means an easy task, requiring delicate balance between the bright “big band” sound of the SWS and the softer intimacy of jazz soloists more accustomed to playing in real combo bands. To their credit, the SWS morphed quite agreeably into some sort of “Jeremy Monteiro Swing Band” — and I say this with the utmost respect — bringing the audience a beautiful experience that would not be shy of top jazz festivals overseas.

Tan was visibly in his element, bopping groovily to the beat, tapping out the rhythm, cue-ing players aloud with “a one, two, three”: a practice virtually taboo at more ‘serious’ concerts, but which gave this whole affair a casual and chill-out air. Throughout the evening he took turns with Monteiro to ad-lib candid introductions for each piece. Indeed, Adrian was among old friends here: he was only seventeen when he first joined SWS, or the National Theatre Symphonic Band (NTSB) as it was known to us old-timers, as an amateur saxophonist. Over the years he had grown with the band, eventually taking over as Music Director when his musical ambitions blossomed into a full-time conducting career helming several bands and orchestras locally and regionally. Tonight, Tan paid tribute to some outstanding colleagues: Jeremy Monteiro (the first jazz musician to be awarded the Cultural Medallion in 2002), composer Chok Kerong (NAC Overseas Arts Scholar 2008 and writer/arranger of two of the songs tonight), Tama Goh (SWS pioneer percussionist and member of the Jeremy Monteiro Jazz Band), trumpeter Kenneth Lun (“brother in music”, as Adrian called him), and singer Rani Singam, who lent a touch of Ella to the night. Coming to support Monteiro from the audience was Grammy Award-winning artiste Ernie Watts, who had co-written some of the pieces in the lineup.

Monteiro on the piano was a joy to listen to, as no doubt jamming with his regular partners-in-crime felt as smooth and relaxed as the jazz they played: Rick Smith on guitar, Tama Goh on drums, and Brian Benson on bass. The combo was joined variously by Julian Chan on saxophones, Kenneth Lun on flugelhorn, Rit Xu on flute and Rani Singam on vocals. The SWS provided a perfect wingman to the fronting ensemble, always present for support and filling in with some fanciful riffs, but never too loud nor upstaging. I would defer from discussing the entire programme in detail, but let it be known that a copious amount of talent can be found in local music circles: each arranger, in his or her own way, demonstrated an understanding of both the wind band and the jazz medium, writing sensitive and mature arrangements that gave the soloists wings. The evening ended with a jazzed-up version of a national evergreen, ‘One People, One Nation, One Singapore’ that Monteiro had written in 1990 for Singapore’s National Day; an anthem of solidarity that aptly celebrates our nation and our people. As the notes faded into the night, there was perhaps more than one performer moved to tears by this heartfelt tribute.

The only hiccup came at the beginning of Rani Singam’s first song ‘Swing with Me’, when a microphone malfunction failed to amplify her voice. Even then, it was smoothed over by Singam’s sultry vocals when she was finally given the right miking:

“Some things are not quite right enough,

not quite clear enough

sometimes we get it wrong…

Yes, the secret: put on a smile,

and take it slow…”

For what is jazz but passion and spontaneity, sparks of magic that align the stars to give spectacular results, even when things seemed impossible to start with? All in all this was an entertaining evening that was a success for everyone involved, proving beyond doubt that even as we draw inspiration from foreign lands, musical talent and living legends are aplenty on our own shores.