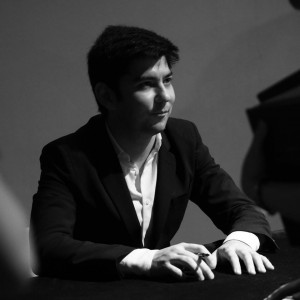 If concerts had take-home messages, this evening’s would be: “Attend live concerts, because even the best audio equipment only gives you a fraction of the actual experience”. At every live performance, there are “epiphenomena” — a unique blend of acoustics, reverberations and other tangible and intangible factors, that serve to enhance the experience, which the audience may or may not be aware of. These are usually filtered out of any audio recording as “noise” and “too much reverb”, or not be recordable at all, with most records nowadays created for a sanitised, comfortable listen. To this end, the amplifying acoustics of the smallish SOTA Hall again served tonight’s Festival pianist well. Even as the piano sounded darker and more velvety than it did last night, the echoes of thundering chords rolled off the wooden panels, multiplied hundred-fold, literally enveloping the audience in a “surround sound”. I could literally feel the music on a visceral level, and coupled with the charged atmosphere from Abduraimov’s hand-flying and foot-stamping, it was an electrifying experience no audio or video recording could replicate.

Uzbekistan-born Behzod Abduraimov has already been in the international limelight for a couple of years. Uzbekistan may be in ethnic Central Asia, but being part of the USSR for 67 years, has its foundations in a purely Soviet school of music, passed down through the hard work of pedagogues at the Uspensky State Central Lyceum, where Abduraimov trained under Professor Tamara Popovich. After taking First Prize at the 2009 London International Piano Competition, his star has been rising meteorically, and he is currently studying under fellow Uzbek alumnus Stanislav Ioudenitch at Park University in Missouri, USA. Abduraimov’s technique and interpretation are first and foremost grounded in the Soviet school — with emphasis on a confident and infallible technique — yet coloured by a more cosmopolitan taste.

The night was not without its less stellar moments. The first two movements of Beethoven’s Piano Sonata no.12 were played well, but the sonority of a modern concert grand rather muddles the bass, and I have always preferred my Beethoven on the dry side. The Funeral March, marked “sulla morte d’un Eroe”, was stately, but not profoundly moving. Was I expecting too much? Perhaps so, for the composer himself was only starting to find his own voice when he wrote this sonata. To his credit, Abduraimov threw himself into the whirlwind rondo of the final movement, and from there on the real excitement of the night finally took off.

A measured and elegant Chopin followed, with the sombre sections of the Fantasie contrasting well with the more flighty passages. Here, Abduraimov coaxed liquid lyricism from the Steinway; one could perhaps have hoped for him to be more carefree and rhapsodic with the rhythm especially in the major-key melodies, but otherwise the performance was flawless. Saint-Saens’ “Danse macabre”, transcribed for piano by Liszt and re-arranged by Horowitz into a physically demanding tour-de-force, fared much better, and on the piano it was every bit as mesmerising as the orchestral version. Devil playing violin? No problem. Skeletons rising from their graves? Par for the course! Nothing was beyond Abduraimov’s fantastical interpretation.

Abduraimov has developed the habit of stamping his left foot as a sort of counterweight for his arms in the heavier passages: this made for occasional distracting sounds, but nevertheless adds some visual excitement to the performance. It is quite obvious why this piece has become some sort of a calling-card for Abduraimov: the precision of his technique, the intuition behind his rhythmic thrust, the force behind his punch, and the imaginative colouring, were all astounding. How does such a lean youth — he is only twenty-four — pack so much devastating power?

After the intermission, the programme was clearly meant to show off Abduraimov’s technical prowess, even as both pieces require a great amount of musical sensitivity as well. One of Liszt’s late works, the ‘Bénédiction de Dieu dans la solitude’ (“The Blessing of God in Solitude”) plays extensively with harmony and line, while retaining much of the impossible virtuosity found in the composer’s earlier works. Even as Abduraimov tossed off the notes with ease, he remained reverent of the melodic line, holding true to the spiritual element of the piece, for which the notes are simply the means. Ravel’s three-movement “Gaspard de la nuit” was allegedly written to counter the claim that Balakirev’s “Islamey” was the most difficult piano composition of all; from this anecdote alone we can gather the extreme level of technical competence required to perform this piece, no less at a live recital. In Abduraimov’s hands the various demons came alive: Ondine the water-nymph danced around a rippling, dappled lake, the atmosphere always beckoning, always ravishing; Le Gibet was a harrowing gallows haunted by bloodied ghosts; and Scarbo pranced like a manic imp up and down the keyboard.

After all the demons and ghosts, Abduraimov clearly emerged the winner of the evening, his fingers always in control even as the audience was swept along in rapture. In this era of digital downloads and high-tech audio equipment, we hope he will continue to bring the “life” back into “live” concerts. Really, this pianist has to be experienced, not just heard!