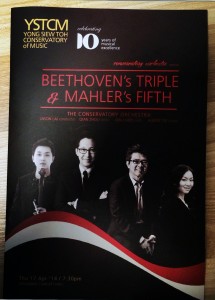 It’s difficult to believe that a decade of music-making has already passed us by – this concert celebrates the Yong Siew Toh Conservatory’s 10th Anniversary. By any standard, though, the conservatory remains one of the youngest in the world, and this performance brought that point home in an exciting, incisive way. After starting a good half-hour late, due to tight security checks (the Prime Minister was the guest-of-honour), principal conductor Jason Lai finally got the show on the road.

The Triple Concerto is not one of Beethoven’s strongest piece. Full of chest-thumping Beethovenisms that I’m not a fan of, it’s just not as musically substantial as his other works, and tends to feel too long by half. Played well, though, it can be at least tolerable. Jason Lai’s orchestral introduction, with a reduced band, started off with a stately, chamber-music feel, with some fine articulation and not a little rubato. Though there were a couple of near train-wrecks, the orchestra found their feet and were on solid ground for the rest of the concerto. 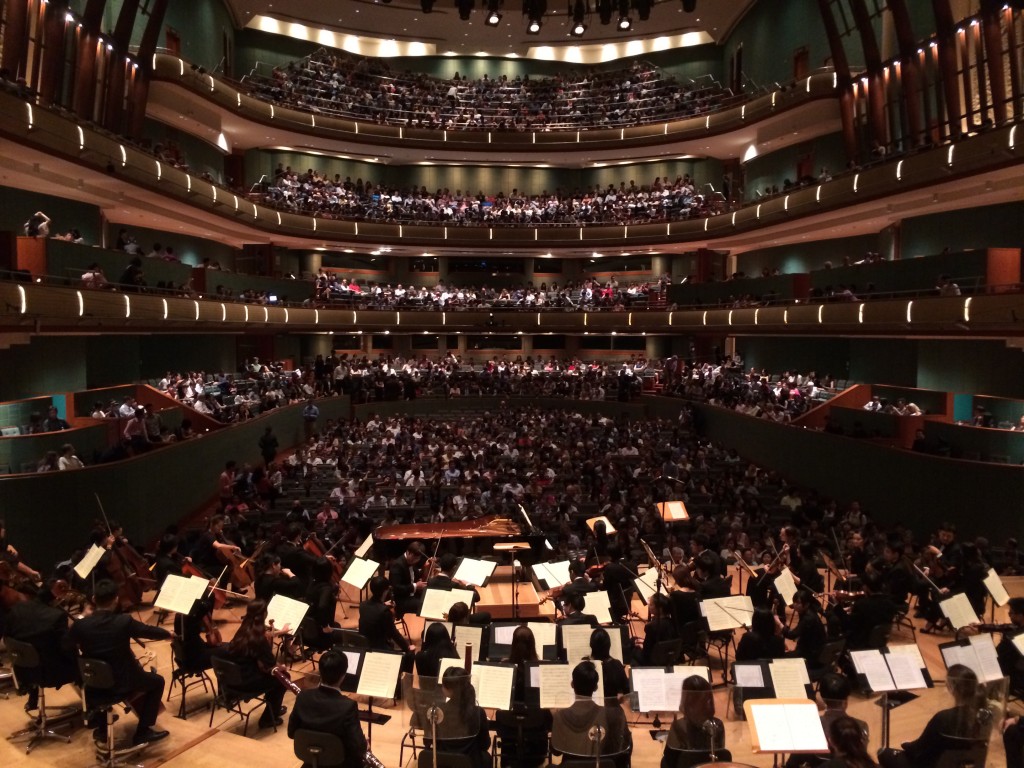 Violinist Qian Zhou, cellist Qin Li-wei and pianist Albert Tiu, all faculty members of the Conservatory, took on the solo parts. It’s hardly an exaggeration to say that Qian Zhou was the weakest link by far in the solo trio, and often felt like the proverbial third wheel. While Qin and Tiu charmed the ear with musicianly phrasing and coordinated ensemble, Zhou refused to blend in in any way with her fellow soloists, sticking out like a sore thumb and sawing away furiously, looking like a caricature of a diva-soloist with her billowing red dress. I am sure that Zhou is a capable soloist, but she never seemed for a moment suited to the Classical idiom, and even less to chamber music.

It’s a pity that the composer wrote so little for the cello here, since Qin’s contributions always caught my ear and his second movement solo was gorgeously played. The third movement could have used a little more propulsion and was overall not as well-characterized as some accounts, but I’m afraid most of the proceedings were, for me, overshadowed by Albert Tiu, who managed to break a string somewhere in the last third of the movement, remarkable, really, considering how  non-virtuosic the music is. Ah, the thrills and spills of live music-making!

Mahler’s Fifth Symphony has long been considered a vehicle for virtuoso orchestras, with the likes of the Chicago Symphony Orchestra under Georg Solti revelling in its difficulty, and as such has become a touchstone of any orchestra. So, is the Conservatory Orchestra ready for the big time? Not yet, I’m afraid. The full orchestra squeezed onto the Esplanade Concert Hall stage and Jason Lai calmly motioned the principal trumpet to start that nervous, exposed solo tattoo. Disaster struck immediately, with a fudged note in the arpeggio, and nerves refused to leave the poor player’s side until well after the movement was over (he fared much better later); in the meantime the third trumpet shone. Lai’s approach to the first movement funeral march was a straightforward one, low on rhetoric and with the suppressed grief that’s now come to be expected of a ‘modern’ interpretation. Low on darkness and missing, for lack of a better word, ‘heaviness’, it would have been a good foil to the second movement, except that, too, lacked the tension, mystery and drama that a greater or more seasoned conductor would have brought out. In parts it could definitely have benefitted from clearer direction, and numerous declamatory points failed to make their mark. Two examples – Lai would have done well to have given his cellos their head in that big central section, instead of breaking up each phrase up, as that allowed intensity to dissipate instead of building up as it should. The big chorale, meant as a vision of a would-be victory, was likewise spoilt by a tendency to rush through instead of allowing it its due time, which then robbed the subsequent feeling of disappointment that the victory was not (yet) to be.

The central Scherzo, a psychological turning point for the symphony, was, interestingly enough, also a turning point for the performance. Here, it was the principal hornist’s turn to tremble. While in some performances the hornist is given the limelight and seated in front of the orchestra, concerto-style, here the concertante part was played, standing, from a raised platform just next to the rest of the horn section. Confidence was an issue here and she did not dominate or add any unique flavour to the demanding solo part. Lai teased out the congenial Wunderhorn elements of this movement though, even if the Sturm und Drang elements weren’t brought out sufficiently, or with enough urgency. But about halfway through the movement, things were humming comfortably along, the orchestra settling neatly into the musical narrative, playing very nicely indeed, and it ended on a high note.

The strings are clearly the best section in the conservatory orchestra, and were, in my opinion, the heroes of tonight’s performance, in spite of numerous solo brass parts. And there was no better way to hear this than in Mahler’s lovely Adagietto. Lai’s moderate tempo – about 10 minutes in all, I believe, breathed and lived like a person wearing an old pair of shoes – it felt comfortable and not calculated in effect the way some can be. String colour was remarkable here and I daresay the interpretation approached the musical heart of the matter. The harpist’s contribution was played excellently. Two quibbles – the musical climax of the piece, marked viel Ton!, or much tone!, felt shied away from, as did the (only) marked massed downward glissando. Otherwise, it was a moving performance that made my eyes moist.

From then on, things went swimmingly. Starting with the dreamy introduction, Lai whipped up a performance that rejuvenated the tired orchestra, with the strings leading the fireworks. With perfectly judged tempi – neither too fast nor too slow – the fugato section zipped off. Lovely oboe and other wind solos breathed life into the movement and were always a joy to hear, and the orchestra kept remarkably well together, while letting it rip, with good humour amidst the excitement. They garnered one last burst of energy, as the band played that life-affirming, sunshine-filled chorale at breakneck speed that the strings, for once, had trouble keeping up with. The final chords sounded, the audience cheered, and it was over – Jason Lai and the orchestra had managed to bring light from darkness, jubilation from certain disaster – surely an embodiment of what the symphony was all about, and an excellent end to an otherwise uneven evening.

PS: Special mention goes to the principal violist, whose obvious attention and commitment to the music made the concert that much more enjoyable to watch.

Agree or disagree with Derek’s review? Write your comments below!