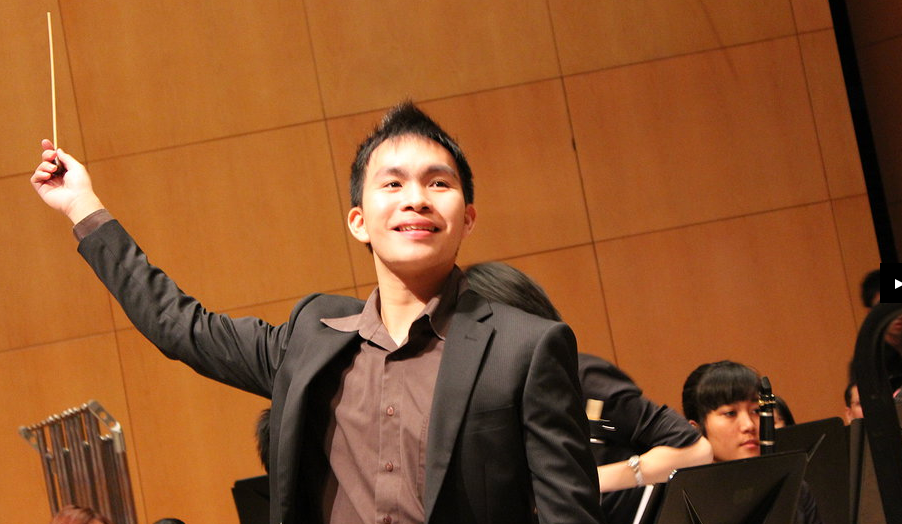 The Singapore Wind Symphony under Adrian Tan will perform a concert this coming Sunday, 23rd February, at 4pm at the Esplanade Concert Hall. Joining them is virtuoso trombonist and Principal Trombone of the New York Philharmonic, Joseph Alessi, who will play a selection of solo trombone works. Alessi will also premiere the trombone concerto ‘Empire’, written by local composer Terrence Wong Fei Yang.

Terrence Wong is 24 going on 25 — precociously young by composer standards — and studying for his Bachelor of Music (Hons) at the Nanyang Academy of Fine Arts (NAFA). Soo Kian Hing caught up with Terrence (left) as he tells us more about himself and his work.

Tickets to this Sunday’s concert can be obtained at $20-25 at SISTIC: https://www.sistic.com.sg/events/josepha0214

The Flying Inkpot: Thank you for granting us this interview, Terrence. Just to start the ball rolling, could you tell us a little about yourself, personally and music-wise?

Terence Wong: I began my musical journey at the tender age of three-and-a-half years old, when my mother decided to send me to learn at the Yamaha Music School. From then till I was eighteen I played the Electone, which, for the uninitiated, is Yamaha’s own electric organ (quite advanced I must say!). In secondary school I joined the band and learnt to play the Trombone and the Euphonium, which I still play now. Over the course of four years in band I somehow grew to prize the “real” sound made by real instruments, as opposed to the electronically sampled ones from my Electone, which led to my waning interest in the latter and then to my quitting the instrument altogether. It definitely wasn’t a waste though; I had won the national-level competition for the Electone when I was 15, and the experience of performing solo coupled with the improvisational skills (which one doesn’t often learn from a classical piano background) helped shape an important part of my life. Following my secondary school years I enrolled in the Nanyang Academy of Fine Arts (NAFA), studying music composition under Dr. Zechariah Goh Toh Chai. I’ve never regretted the decision to study there, despite the fact that most of my peers went off to Junior College (JC) since I came from Catholic High School.

I feel that I cannot live without music. Strangely enough, having heard a statement made by a fellow friend and conductor that he “missed playing on his instrument”, I realised that I haven’t performed on any instrument for a few years and that hasn’t bugged me at all! However I cannot imagine myself going a few months without writing a piece of music or delving into some music-related research. I guess I’m a composer (and perhaps musicologist?) at heart.

Are there any other musicians in your family?

No, not at all — there is not a single person in my entire extended family who is a musician! I’m the only one who has a musical background.

Growing up, who were your greatest influences in musical performance and composition?

The first great influence would definitely be my secondary school conductor, Ms. Tan Yiang Hoon, who was absolutely passionate about music making and taught me to value it much more than technical perfection, because even if the latter is achieved, it alone hardly fulfills the purpose of making music in the first place! The second would be my composition professor at NAFA, Dr. Zechariah Goh, who led me to realise that music making and composition should not just stem from musical knowledge and be for the sake of music alone; I need to incorporate the many facets of life such as emotions, empathy for others and so on. Lastly I would name Mr. Lim Yau, who taught me conducting for a year. He helped me see that contrary to popular belief, composing for and conducting other musicians is hardly akin to a ‘master-and-slave’ situation; there needs to be a lot of give and take in order to help create a successful performance.

We understand that you recently went to London to study at the Royal College of Music (RCM) in London. How was that different from studying in Singapore? Which greats did you come into contact with? 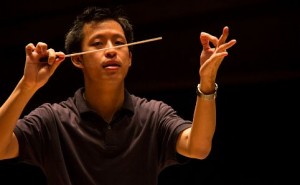 While on exchange at the RCM, one of the biggest things that struck me was the cold! I have never been overseas under such temperatures (it was between 5 to 15 degrees Celsius then). This may sound trivial, but it led me to notice that the pace of life there was a lot slower as well, which in turn led me to think of how people in differing climates may function differently and thus live differently. Another thing I noticed was the super-vibrant arts scene; apart from the ever-popular musicals, there were tons of arts-related events going on every single day, at various concert halls and theaters spread all across the city. I was definitely spoiled for choice! Even so, the quality of the performances I went to were all superb, even for an amateur choir that I managed to witness, for example. Over there, there were so many opportunities for local arts practitioners to showcase their work; this is something that I feel Singapore has to improve on if it wants to become a world-class city and arts hub. We need to showcase our own works and talents; otherwise, who will? Fortunately, in that respect, we have people like Adrian Tan and many others who have been championing local works in Singapore in the last ten years, and I hope to become one of those who are able to help this movement gain momentum in time to come.

At the RCM I got to study with Professor Kenneth Hesketh, who helped me to better understand twentieth-century and contemporary music, and their purpose. He also showed me new dimensions in composition which I have not thought of previously. That, and the RCM’s gigantic library resources and diverse community of musicians, helped boost my knowledge greatly and further fueled my fiery passion for music.

You must be stoked to have a new work premiered by Joseph Alessi (left)
Can you tell us more about ‘Empire’, and how you came to write it? What attracts you to the wind symphony format?

‘Empire’ was inspired by the not-so-ancient empire of Mangkunegara in Central Java (founded c.1757). I was particularly inspired by the intimidating grandeur of the Mangkunegara’s palace. This piece depicts the general fate of nations that have come and gone in ages past, and it features the virtuoso solo Trombone, showcasing the instrument’s martial and brilliant character as well as its lyrical and gentle side. It’s written in a very personal style that fuses together pan-tonality and post-minimalism (just to name a few influences), and focuses very much on the interaction between the soloist and the band, and also within the band itself.

I’ve written a few pieces for wind band so far, though I would say that it is hardly a breeze to write for this medium! Still, I guess it’s a medium that is familiar to me since I came from a wind band background myself. Though I enjoy writing for wind band, I do write a lot for other mediums as well; I particular like writing for chamber ensembles. 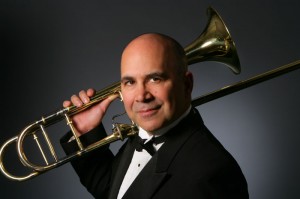 Joseph Alessi is undoubtedly a titan of the trombone world. What was it like working with him, and how much did he influence your work? How did he come to play your work?

Through conversation and discussion with Mr. Alessi via Skype, I’ve gotten to know him as a very kind and humble person… this despite him being a titan of the trombone world! It was a great experience working with him, even though he didn’t influence the work very much with regard to the creative process. What he did do was to provide a lot of useful advice pertaining to the technical aspect of the solo part; there were times where I wrote long passages that didn’t allow for any breaths in between! Of course, following his advice, I edited these sections. As for how he came to play my work, I must thank Adrian Tan, music director of the Singapore Wind Symphony: it was his idea that I, being both a Trombonist and a composer, should write for Mr. Alessi and the ensemble. It would be a gross understatement to say that i’m very honoured to be able to write a piece for one of the best Trombonists in the world!

How has it been working with the Singapore Wind Symphony and Adrian Tan?

It has been fascinating! For one, it is always thrilling for me to experience my work played by a live ensemble, regardless of minor flaws here and there caused by human error. Working with Adrian has been fantastic. He’s someone who is completely passionate about promoting local works and supporting local composers, and he has given me a lot of advice prior to the completion of the work about the various possibilities (and impossibilities!) of writing for this event. I’m glad to say that with this gigantic opportunity, I’ve grown very much not just as a composer and musician, but as a person as well. On a side note, I’m very glad to see that the band has improved steadily over the last few years, and it’s entirely possible that that’s due to the number of new local works the band has had to learn and premiere under Adrian’s baton!

Lastly, some advice for budding composers! Sibelius once said “a symphony has profound logic and inner connection” to which Mahler disagreed, saying “a symphony must be like the world — it must embrace everything”. What is your own take on symphonic composition?

What a coincidence – I’ve been obsessed with Sibelius’ late symphonies for the past half a year, and I’ve read this conversation of his and Mahler’s many times! I must say that I see the merits of both viewpoints; indeed the two master composers have each found their own ways of dealing with symphonic composition and bringing it to the pinnacle of their ideals successfully. Personally, both in retrospect and at present, I lean more towards Sibelius’ viewpoint. Many of my works so far utilise short cells which develop into entire pieces without the presenting of conflicting ideas, including ‘Empire’, in which the entire piece grows from the first chord. I see more room for development in a single idea that holds the piece together, than presenting many ideas and then resolving the conflict between them; in short, I strongly believe in the quote from William Blake’s ‘Auguries of Innocence’ that it is possible to “see the world in a grain of sand” through a well crafted piece of art.

Inkpot: With that, we come to the end of the interview. Thank you for your time, Terrence, and we wish you the greatest of success in your future career!

**
You can learn more about Terrence Wong on his website at www.terrencewong.com
Get your tickets to this Sunday’s concert at $20-25 at Sistic: https://www.sistic.com.sg/events/josepha0214