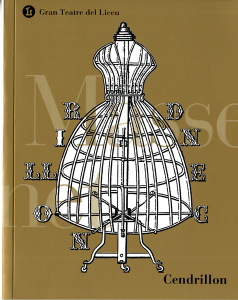 Huge disclaimer right from the start – I’ve never seen or heard Jules Massenet’s Cendrillon before this. That having been said, this performance and this production were so magical and inspired that it would be amiss of me not to give it a mention in The Flying Inkpot, so here we are. Massenet’s operas are not often performed, losing out to the numerous Verdi, Puccini and Wagner operas in terms of popularity. Cendrillon isn’t ‘deep’. It doesn’t have huge, blockbuster melodies that you will try to sing days after having heard his music. But as an act of entertainment, it is supremely successful.

Massenet takes the story of Cinderella (Cendrillon in France), described as a ‘fairy-tale opera’, and presents it in four acts. This production at the Liceu had two casts – this was clearly the better-known cast, having already recorded the opera on DVD, very successfully, and I chose to watch DiDonato because of her increasing following. The production took Massenet’s description of a fairy-tale opera at face value and elements of a literary – for example, the entire wall was a huge story-book in parts – wove their way through it, giving a slightly whimsical touch to it all. Costumes were delightfully chosen, sometimes adding to the comedic element of the opera (those many bachelorettes at the ball!) and always in character. The orchestra, too, was responsive to Andrew Davis, adding character and drama to the proceedings.

But it was ultimately the voices which won the night out. Here was a truly top-notch cast. Ewa Podleś, was the stepmother, had delightful comic timing and needless to mention, a rich, true alto voice which she has become famous for. Joyce DiDonato, who’s helmed various new productions on the strength of her flexible mezzo, delved deep into Cendrillon’s heart-felt music from her first aria and completely inhabited the role, while Alice Coote, looking so convincing as a man (Prince Charming) that she evoked gasps of disbelief when she started singing, did at least as well as DiDonato, though it could be argued that their voices are too similar in timbre. None of them, however, managed to outshine the fairy godmother, played by Annick Massis, a French soprano whom I’ve not had the pleasure of hearing before this. She tackled the coloratura bravely and tirelessly and was the very embodiment of the magical (albeit very statuesque) creature. She garnered the loudest applause, cheers and hoots of the evening from the full-house (and it seems, mostly Catalan) audience – ending a most satisfactory evening at the very lovely Gran Teatre del Liceu.