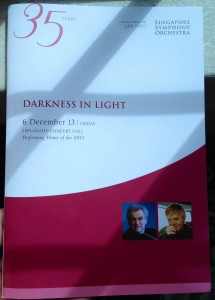 Review by Chia Han-Leon aka ‘The Inkpot Sibelius Nutcase’

“Mr Kuusisto, could you address this to ‘The Inkpot Sibelius Nutcase’?” I gingerly asked at the autograph session. “It’s a nickname I used when I wrote about Sibelius in the past”.

“The Inkpot? That sounds familiar….. Oh it’s you!” To my delight, it seems he might have remembered the name. 🙂 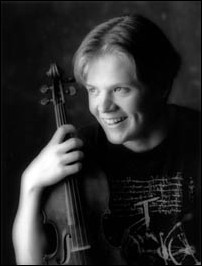 Pekka Kuusisto (right) was here in Singapore to perform Finnish composer Sebastian Fagerlund’s Violin Concerto, “Darkness in Light”. Age 41 this year, Fagerlund is considered one of Finland’s most promising young composers. This is my first time hearing his music, and I must absolutely agree. His music has been described as an “appealing mix of pulsating rhythmic layers, expansive gestures and undulating extended chords. ” (Finnish Music Quarterly http://www.fmq.fi/2011/03/sebastian-fagerlund-full-speed-ahead/). It’s beyond my technical ability to describe with justice, but his sense of orchestral colour and ability to generate forward momentum is very compelling. A very apt example is in the “Energico” – the first movement of the concerto. It is as ferocious as a fast-approaching storm, full of skittering winds and wild energy. The colours evoked by both orchestra and solo violin are spectacularly varied, with some truly alien sounds from the latter during cadenzas. An array – an aurora – of percussion, including piano with strings plucked directly by hand in the second movement, the “Lento intenso”, added to the post-post-modern soundscape of our century. The musical material warps through the orchestra with unstoppable energy in a multitude of hues, streaks and waves.

My words cannot do it justice, so I invite you to watch and listen to it yourself:

Osmo Vänskä is a name still synonymous with Sibelius’s music today. During my time writing as the Inkpot Sibelius Nutcase, he appeared in the scene, courtesy of BIS records, at the exact right time. He came along as a step up from what BIS had already recorded in earlier years – those earlier recordings (principally from Estonian conductor Neeme Järvi) were part of my formative years listening to and studying Sibelius; but with Vänskä and BIS’s Complete Sibelius Edition, my journey ramped up several gears. The maestro is a hero to me.

His first visit to Singapore back in 2010, however, was to conduct Mahler, a matter I lamented slightly about. But on this night, Fagerlund’s concerto was an unexpectedly enjoyable bonus to the symphonic main course: Sibelius’s Fifth Symphony. As one of the first conductors to record the original version of the Fifth, Vänskä is unique, and thus to me, this concert was a must to attend.

But before the Finnish courses, we were treated to an unusual treat, or rather, an unusual “arrangement.  Maestro Vänskä began the concert by taking up the 1st clarinet in Dvořák’s Serenade in D minor, Op.44, and I had a great view of his and his ensemble’s playing from row E in the hall. Together, the group of 2 oboes, 2 clarinets, 2 bassoons, contrabassoon, 3 horns, cello and double bass evoked a beautiful atmosphere – quintessentially Dvořák: melodious, summery, nostalgic, “European”, their playing perfectly poised. And speaking of poise, cellist Ng Pei Sian’s lively and poetic cello-playing was a joy to watch and almost stole the entire show. 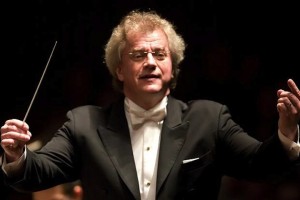 Vänskä’s (left) recordings of the Sibelius’s symphonies always have a special touch to them. When they are really good, they are an absolute revelation. Suffice to say, the performance tonight was simply the best “live” performance of the Fifth I’ve ever heard. Even the flubbing of the opening dawn calls by the horns, and some unsteady woodwind work in the beginning did not ultimately spoil my experience. The finale was taken very fast. The SSO strings kept up dutifully, unified and together, with impressive precision and energy – and the swan hymn was born out of that sweeping soundscape completely naturally, with grace and grandeur. The orchestra simply glowed. The E-flat gradually, and with a smoothness and logic rarely achieved “live” – evolved into the magnificent C major climax. My mouth was open with admiration. The triumphant brass paeans in the finale shimmered and blazed with confidence and life; the final life-affirming chords were perfectly forged, the intervals between the silences masterly timed by Vänskä, each chord reverberating in the Esplanade hall, booming with nature’s mysteries and answers. There I heard the silence that speaks, as Sibelius would’ve put it himself.

After the concert, with the help of good friends in the music circle, I made my way backstage (being told later that it’s harder to get a backstage pass than a free ticket to Finland). Mr Vänskä stepped out of his guest room just as we arrived.  I told him about my love and work promoting Sibelius, got him to autograph the original BIS issue of the original version of the Fifth Symphony, and showed him, using my iPad, the Sibelius Facebook Page (http://facebook.com/dustofhue) I run. “On behalf of Sibelius,” he said genially, “Thank you.” It was very much a historical, happy moment for the Inkpot Sibelius Nutcase.

This review was adapted from http://dustofhue.com/2013/12/darkness-light-singapore-symphony-6-december-2013/
Follow the link to see more exclusive photos!