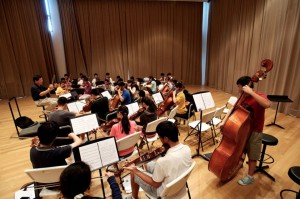 The Orchestra of the Music Makers (OMM) is known for their immense passion in music. Their recent outreach programme – a one-week camp in collaboration with the School of the Arts (SOTA) – brought together many young musicians who are just as dedicated to the art of music making, and concluded with a small concert held in the SOTA Orchestra Rehearsal Studio.

The programme was challenging, given the short span of time they had together. The audience was firstly presented with a rendition of Ralph Vaughan Williams’ English Folk Song Suite that radiated with a youthful spirit, perfectly complemented by an intermezzo that featured excellent solos from the oboe, flute and the concertmaster.

A concerto requires a different manner of playing altogether, but the orchestra provided a sympathetic accompaniment for 16-year old Lieu Kah Yen, winner of the OMM Concerto Rehearsal Experience Prize at the 2012 Young Performer’s Festival in the fiendishly difficult Vieuxtemps Violin Concerto No. 5 that disguised the fact that many of the young musicians were accompanying a soloist for the very first time. The limelight was never taken away from Lieu, who gave a respectable display despite the potentially unnerving atmosphere of the intimate setting.

There were moments in Haydn’s Symphony No. 104 when the musicians seemed deeply attuned to each other, especially in a sublime second movement, and the exuberance of the finale, taken at a risky tempo, was reminiscent of an energy that their mentors from OMM are famous for.

The only flaw was the lack of seats for the oversubscribed concert, which deprived many from witnessing the success of a noble project. Hopefully, more orchestras will follow their lead to inspire our youths to bask in the joy of performing classical music.