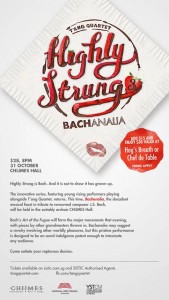 Classical music concerts can sometimes be predictable affairs, but no one would call  T’ang Quartet’s programming for their third ‘Highly Strung’ concert conventional. It’s a mystery to me why they decided to just give a wisp of a description in their advertising, saying merely that Art of Fugue movements would be played as well as pieces by other composers such as Dvořák and Johann Strauss. In the event, neither Bohemian or Austrian master made their appearance in what was a very varied programme. The well-known local quartet alternated between pieces by other composers and movements from The Art of Fugue, beginning with the Contrapuntus 1 and moving their way through.

The T’ang Quartet (sans Ang Chek Meng, who we hear is ill – get well soon!) performed with a quartet of guest musicians, who Leslie Tan, the cellist-cum-emcee for the night, oddly, didn’t introduce. Strange, since these ‘younger’ performers are well-known in their own right – Loh Jun Hong, for example, is a prize-winning violinist who’s performed in more than a few concertos, and they would certainly have added to the billing, while Lim Juan is a solid cellist whose orchestral contributions have been assets to more than a few orchestral concerts (and played well in all his contributions here).

The guest musicians made their presence clearly felt in outstanding contributions, especially in Richard Strauss’ Sextet from Capriccio, which especially benefited from the (over)-reverberant acoustics of the CHIJMES Hall, a deconsecrated chapel and had a lovely singing quality and was shaped with a firm hand, even as the piece itself rambled in that romantic way that Strauss tends to. Wang Yang Zi contributed some well-played solo parts.

Heinrich Bieber’s Battalia was a surprise piece from an otherwise lesser-heard master – ‘Baroque music didn’t start and end with Bach’, as Leslie Tan put it – with artfully played solos from Loh Jun Hong, unrestrained stamping of feet and as promised, gloriously inebriated musician-sailors. Barber’s Adagio was the best-suited to the hall, being, well, mostly slow music. Taken at a fairly flowing tempo, it was melancholy without being a dirge. Piazzolla’s La Muerte del Angel – chosen, certainly, because of that fugato-like opening, was ruefully introduced as the one composer the T’ang Quartet has to play at every concert, but efficiently and enthusiastically despatched. Which leaves only The Art of Fugue selections – as the backbone of the evening’s music, guest members swapped in and out of the proceedings. Generally, the slower contrapuncti worked better than the fast ones, as detail tended to get lost in the reverberance of the hall. Perhaps in order to accommodate for the echoes, the faster movements were also taken a little more slowly, which ended in them not sounding as vibrant or joyful.

Finally, great as it is to listen to the newer generation, it was in the music where the three quartet players were performing that came off the most musical. Programming-wise, it was an interesting evening of discovery, but sometimes there was the trouble of the music sounding the same after a while, and the switching in and out of players was sometimes distracting. Now, how about a collaboration with a couple of wind players or a pianist for the next concert?

The T’ang Quartet’s next concert, ‘Take a Bet On T’ang’ is at 7.30PM, 20 December 2013, Esplanade Concert Hall. Program TBC – probably at the concert itself!

Concert Preview: An Inktroduction to the T’ang Quartet

Concert Promotion for Friends of TFI: Bohemian Rhapsody by the T’ang Quartet
Share