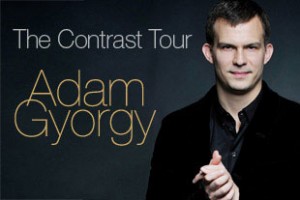 Pianist Adam Gyorgy says on his website that “Some people say we have to break down the walls between classical and popular music. I would say we don’t need to break them down, because there are no walls.” That may be so, but there is good music and bad, and the quality of music presented in this concert was variable.

The best-played programmed piece of the evening was the multi-hyphenated Mendelssohn-Liszt-Horowitz-Gyorgy ‘Wedding March and Variations’, a celebration of virtuosity which was right up Gyorgy’s alley as a technician. Gyorgy conflates the Horowitz version with a section of the  transcription of the part of the Overture, with more fireworks in between and an addition part where the theme from the overture and Wedding March are played in counterpoint. Adam Gyorgy clearly has technique to burn but  this was given a restrained performance rather than a flashy one – tasteful and with a bit of the virtuosity in check. It came off the most successfully of all the music we heard.

The Mozart was also well-played but less convincing, placid rather than excitable the way some play it, but as the pianist settled in, his interpretation included some oddities – a mis- (or different) reading of a grace note in the second theme that was distracting (the a to a leap, which he plays as two notes of equal value rather than as a grace note – he plays it in the same way in his recording, so you can listen to it here), as well as some untidily executed trills. Tempi were moderate and the playing not unlovely, but it could have afforded to twinkle and sparkle a little more especially in the last movement – the whole thing seemed slightly reticent, as if it was trying too hard to be well-behaved but ending up just a little boring instead.

Which only leaves Gyorgy’s own piece – a ‘love letter to New York’, where he now resides. While attractive in small doses (mainly the first three minutes of this twenty-over minute piece), his strictly diatonic melodies are not particularly inspired and quickly forgettable. His piece starts in stillness, which I’d imagine depicts the quiet the greets the start of the day, and relies on repeated notes later to depict stillness or thrumming motion. He introduces a three-note descending theme, which is then explored in major and minor garb. Unlike the complexity of the Mendelssohn transcription, his own music is simple, relying on repeated phrases that vary only slightly as the music develops. It was like a fantasy, except that, as programmatic music we. the audience, often didn’t know where the music was going – the composer says that running along side the East River as well as Times Square are depicted. The more memorable parts – few and far between – were when the consistent diatonic-ness was interrupted by something more chromatic. It wasn’t difficult to listen to, just not particularly rewarding, like a twenty-minute-long Kevin Kern composition. I’m afraid that on the face of this, Gyorgy is not a major compositional talent.

The Hungarian pianist finished off the concert with two encores – a sparklingly-played La campanella, again played with restraint and showing his significant digital skills, and Moskowsky’s ‘Etincelles’ – an extremely cleanly played rendition that had just a touch of humour too – a great piece to remind us that whatever it is, Gyorgy’s virtuosic chops are not in question.

Adam Gyorgy is a Steinway artist