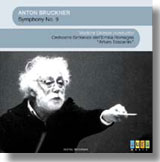 Symphony No. 9 in d minor

live recording, 1994, location not given.

This is an important document of a live performance by a highly accomplished conductor, largely unknown to record collectors, but highly revered by those who attended his concerts. Vladimir Delman (Leningrad 1923-Milan 1994) was, as far as I can tell, a Russian conductor but as it turns out, ended up in Italy, a country he loved and took up citizenship in. A interesting story is outlined in the essay included with the CD, but a complete biography or a time-line is not given, more’s the pity. Neither is the location of this performance given, and only the year of performance (1994 — his last year) is noted.

Finicky collectors such as myself may complain about the lack of such details but the performance itself, as they say, the bee’s knees, and something quite special. From the outset, the tone and phrasing assure you that this is going to be no ordinary Bruckner. For one thing, it is extraordinarily laid back and relaxed, rather too relaxed for my taste at first, but as we progress into the performance, the phrasing becomes tighter as the orchestra settle into the music. It remains slow, but not to the extent of an Asahina, for example. Slow tempi don’t mean a lack of tension however – the long line is never lost and Delman’s extraordinary ability, so important in Bruckner, to outline the architecture of the music without compromising on the details – and there are plenty, serves him well. This is a single document and I’ve no idea how he must have conducted other works, but he has also has a fine ear for shading, which I imagine must have served him well in the Tchaikovsky that he was so famous for, and perhaps the French composers.

The firstmovement is gloriously broad — the timing alone, 27:21 should give you some idea how much that is. It never feels very slow though, such is the mastery of the architecture. Beauty of orchestral tone, pace Celibidache, is not the most important thing in this performance, the drama is. The orchestra responds with such outstanding sensitivity to Delman’s hands (he didn’t use a baton) that one feels they must have either been very well-rehearsed or else very familiar with the music. The result is that many subtleties of interpretation are brought out by Delman surpassing, I suspect, what many major orchestras would have been able to accomplish. The first movement is grand where grandeur is required and achingly lyrical when song is called for. The terrifying passage with the scurrying violin figures is the cataclysmic vision that it should be. The orchestra play like they have Bruckner in their blood, the whole movement speaks of apocalypse and the end of times, the way a good performance should.

The poisonous second movement, mysterious and with that harmony so advanced for the time that Bruckner predicted that listeners wouldn’t be able to understand it (but by that time I’ll be in my grave, he said), is not the militantly violent performance Wilhelm Furtwängler made it in his 1944 performance (a must listen), but at moderately quick tempi is still powerful and full of Brucknerian character.

Delman’s tempi are relatively swift in the last movement — only 20:58, which in lesser hands might have reversed the weight of the symphony (indeed a feeling that this has occurred is not totally avoided), but largely the power of this movement is not detracted from; the “Tristan” like outburst feels in fact more powerful for this choice of tempi. Introspection is not on top of the list of priorities for this performance, passion is. Suffice to say that Delman guides the performance through with a firm hand and nails all the important climaxes. The ending is not quite as tranquil, not quite the lullaby that Horenstein for example brings to the music. One still feels tension, and is surprised that it is the end of the symphony — perhaps Delman meant to convey that.

Italian orchestras are, shall we say, not known for the high quality of their performances of the canonic symphonic works, though their quality in opera and Italian music is undenied. The level of ensemble and a certain technical polish is still wanting here, but they respond to the conductor in such an active way that you forgive them for it.

This performance, then, is recommended to Bruckner enthusiasts who already have their first five recordings, perhaps, who want something interesting and different, and all those interested in discovering a conductor who, like Celibidache, hated recording, but unlike him was actually hardly recorded. If Aura Music turned their interests now to issuing his Tchaikovsky cycle, highly regarded in some quarters as one of the best, we would have a better portrait of Vladimir Delman.

Thanks for your comments, Chris. Which orchestra did you see him conduct in the 70s and 90s? Have you heard any of his other recordings? Welcome to TFI, by the way.

I agree with all this except for one detail. When I first saw Delman conduct in the late 1970s, he used no baton, but I attended several of his later concerts in the early 1990s and by then he was always using a baton. Presumably, then, he used it in this Bruckner performance.
He was terrific in Tchaikovsky and Shostakovich (which you might expect), also in Berlioz and Mahler. His Beethoven 9 was pretty impressive too.