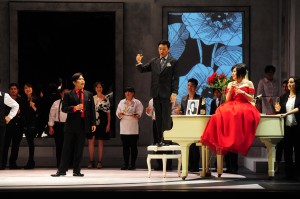 What makes a good opera production? The sets, the direction, the wonderful costumes, certainly. But in the end, opera is a celebration of music, and the voice, and in these, the opening night of the Lyric Opera’s newest production of Traviata was let down.

As always, the good stuff first. Despite the cheerfully updated modern setting, replete with iPads and MacBooks,  (both Act II – how much did Apple pay for product placement, one wonders?), Instagraming party-goers in Act I and paparazzi with their DLSR cameras, the essential elements of the opera were unchanged. As the director, Stephen Barlow, says in his note, it is one of Verdi’s operas that takes best to ‘updating’. The sets were simple but effective, with a white baby grand and decent chandelier in Act I and large display panels which in turn displayed, amongst other things, a bunch of camellias – an allusion to Alexander Dumas’  La Dame aux camélias, which Verdi based the opera on,  photo of a young(er) Nancy Yuen and a looming Eiffel Tower. Hardly Zeffirelli, but it worked. Costumes were slightly touch-and-go for the leads – Nancy Yuen as Violetta, perched on aforementioned baby grand in Act I, wore a scarlet number that, with her highlighted bob-cut, made her look ten years younger, while in Act III a black leather get-up more suited to Fifty Shades of Grey made me wonder if the director was implying a hidden masochistic personality. Japanese tenor Murakami as Alfredo got the worst costumes of all the leads, (T-shirt and jeans in Act II? Really?) with a floppy hair-cut to boot.  Germont pere got far more fetching (and fitting, besides!) suits, looking dashing throughout.

Direction was by and large well-done and not too distracting, but clearly worked within a prescribed budget. Act III, for example, is usually made more of a meal of, in this production a single dancer of each sex had to represent the gypsies and Madridian matadors, which I however have to say I enjoyed greatly. The decision to have the chorus on-stage during the bacchanal was the one strange decision – usually it’s off stage.

Which leaves us with the music. Despite the well-rehearsed chorus and orchestra, which have never sounded better, this was a mixed bag. Conductor Joshua Kangming Tan tended to be subservient to the soloists and action, supporting rather than leading the music. In opera that generally doesn’t sound like that bad a thing at all, but in practice it became monochromatic and a little boring, especially in the many episodes in Act II, which needs a steady hand to guide it through its longueurs.  ‘Di provenza il mar, il suol’, in particular, was beautifully sung, but seemed to get slower and slower it unfolded.

All these problems could have been forgotten, if not for the less-than stellar performance of the lead soprano. In Act I, Nancy Yuen sounded like she was ‘marking’; in ‘E strano… Sempre libera’, she was at times hardly audible (and this was from Row O in the stalls), which made me wonder if she was ill. While her acting has improved over the years, her voice, especially its top, wasn’t in good shape at all, and some ugly sounds were heard as well at her lower tesitura. This was a joyless performance of this all-important first act aria and though everything improved from Act II, for this reviewer it was too late – you really need the abandon of Violetta’s personality to shine through for the rest of the opera to make sense, otherwise the character becomes like another Mimi. Even the interpolated high E-flat couldn’t save it. Bizarrely, she sounded in better voice in Act IV and managed to be rather affecting, when she dies, than she did when she was supposed to be in relatively good health in Act I. Crucially, her ‘Tu m’ami, Alfredo’ also did not hit its emotional mark.

Her Alfredo, the young tenor Kota Murakami, was underpowered in a role typically played by bigger voices. Lacking stage presence (height, mainly) and with an unfortunate set of costumes, he barely made his presence felt in the opera, though he hit all the notes in his ‘De’ miei bollenti spiriti’ and the cabaletta that followed. He doesn’t have an Italian ping in the voice, which vocally meant that he was disadvantaged in this repertoire.

The best lead voice of the night, not surprisingly, was that of Song Kee Chang, who sang five years ago in the last Traviata the SLO put up. With his large, full-bodied, chocolaty voice, he dominated most of the Act II exchanges and, together with his effective acting, made his presence felt whenever he appeared. He also looked much better than Alfredo Kota Murakami, further the Japanese at a further disadvantage.

Traviata is a great opera, and justifiably easily Verdi’s most popular. But it will not run on auto-pilot and its familiarity means that audiences know the music inside and out. Perhaps the SLO should continue their practice of putting up slightly less known works. This tired warhorse might be ready to be put to pasture for a while.

See photos from the production below. Photographs courtesy of the Singapore Lyric Opera 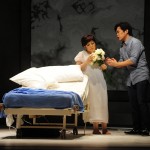 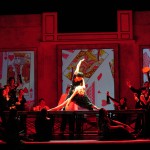 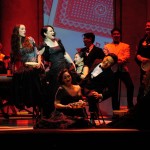 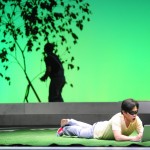 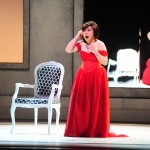 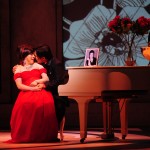 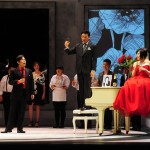 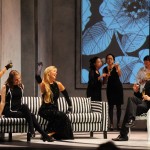