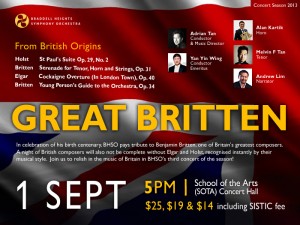 The Braddell Heights Symphony lived up to its reputation of ‘[growing] the local arts scene’ in a concert of likeable orchestral works that would provide an excellent introduction the music of English composers in celebration of Benjamin Britten’s 100th birthday.

Holst’s St. Paul’s Suite made for an excellent opening set, beginning and ending with rousing dance movements. The opening melody featured a lively string sound in perfect unison, which spiraled into an energetic accelerando into the movement’s finish. The solo by concertmaster Ivan Peev in the third movement was particularly lovely and demonstrated a taste of the talent the orchestra contains.

Britten’s ‘Serenade for Tenor, Horn and Strings, Op. 31’ formed the core and most difficult portion of the program, both for the performers and the listeners. As conductor Adrian Tan remarked in his introduction, Britten’s musical language in this work is not one that may be immediately accessible for the newcomers to 20th century art music, but the effect of Britten’s of six poems leading us from dusk to midnight can be stunning if performed well. Unfortunately, Melvin Tan’s patchy performance made this task difficult. Though Tan had some beautiful moments especially in the fourth movement, ‘Elegy,’ he had difficulty guiding the listener through the nuances and shades of Britten’s text setting. However, Tan’s performance was beautifully accompanied by the orchestra, and Kartik Alan’s performance on the horn was generally solid and particularly haunting in the ‘Epilogue,’ performed offstage.

‘The Young Person’s Guide to the Orchestra’ made for a delightful finish to the program. Composed originally for an educational film, the work features solos by each instrument in turn, all variations on a theme by Henry Purcell, a Renaissance-era English composer. The theme was played with gusto by the whole orchestra before each instrument was introduced by narrator, Andrew Lim, with new narration by Singaporean writer Angie Lim. This was the perfect piece to expose some of the orchestra’s talent, such as the oboe section which shaped its line exquisitely as well as a robust brass section that propelled the tutti sections. The best testament however to the orchestra’s successful performance was the row of children in the balcony who, guided by the commentary, were clearly enjoying each instrument’s character, giggling at the more whimsy lines and rapt throughout.

SOTA’s fantastic facilities make it hard to imagine that they belong to a secondary school and not a conservatory—they would certainly be the envy of many conservatories worldwide.