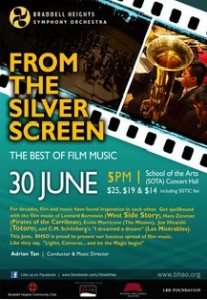 Some of the most best and exciting music of the last century was written for movies. Braddell Heights’ latest concert, ‘From the Silver Screen’ eschewed some of the usual suspects by John Williams et al, opting for mish-mash selections – some classical music used in films, some specifically written as soundtracks. Special care seemed to be taken to highlight some of the orchestra’s more talented musicians – Ennio Morricone’s      ‘Gabriel’s Oboe’ was taken on by Japanese oboist (and lead oboe at the BHSO) Makiko Kawamata, whose creamy tone I’ve mentioned more than once in previous reviews and whose lyrical performance of the piece I enjoyed. Principal horn Darren Sim, who is also music director for the Singapore Wind Symphony Youth, led the orchestra in the first movement of Mozart’s G minor symphony K183, a big-band rendition that could have done with more transparency – perhaps a smaller string-to-wind ratio could have helped. Taken at a moderately slow pace, the Sturm und Drang aspects emerged nicely.

It was one of those concerts where everyone – orchestra, conductor and audience, seemed to be enjoying themselves. But broadly speaking, the non-classical selections turned out better than the classical ones – ‘The Merry-Go-Round of Life’ from Hisaishi’s Howl’s Moving Castle emerged with graceful lightness, while ‘I Dreamed a Dream’ from Les Miserables, sung by 19-year old Amni Musfirah and sensitively accompanied, was moving without being over the top. If her follow-up, ‘Skyfall’, wasn’t as satisfying, that’s because she was being measured up against the original singer, Adele’s far meatier voice. Continuing in the contemporary element was John Williams’ saxophone concerto, ‘Escapades’, played sensitively and with a wide tonal palette by Samuel Cheah, though a more extrovert approach wouldn’t have been amiss.

Dukas’ ‘The Sorcerer’s Apprentice’ and ‘Sunrise’ from Richard Strauss’ ‘Also Sprach Zarathustra’ were also attractively played. But it was in Hans Zimmer’s selections from ‘Pirates of the Carribean: Curse of the Black Pearl‘ and selections from Bernstein’s ‘West Side Story’ that the conductor was in his element, whipping the orchestra up in an exciting free-for-all that was in parts, dazzling.