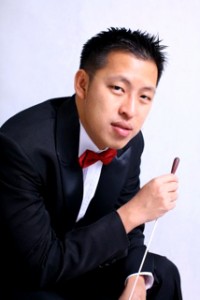 Of all the amateur symphony orchestras in Singapore, the Braddell Heights Symphony Orchestra is perhaps the only that can lay claim to being truly a community orchestra, with players of diverse backgrounds and capabilities pit themselves against the great classics.  Not for the BHSO the glamour of the Philharmonic Orchestra or the Orchestra of the Music Makers, and their Mahler symphony and all-Stravinsky concerts, yet there’s something refreshing about hearing musicians striving to meet the challenges of the music that makes us realise how difficult this must have been when these composers first put ink to paper. Appearing for the first time as newly minted Music Director was one of TFI’s alumni, Adrian Tan (right)

The concert’s title Legends of Love may have been intended to provide a unifying theme, but the association was quite frankly, weak. The first was Chen Zhangyi’s Ariadne’s Love, a short, barely five minute piece for strings and choir, which was one of the winning tracks in the Abbey Road Studio’s anthem competition. This was its Asian premiere. Here the orchestra’s pared-down strings sounded thin, especially compared the luscious tones from The Singers Vocal Ensemble. A large part of this was certainly due to the SCO Concert Hall’s dry-as-dust acoustics, but pitch was also a problem, and the exposed writing did the performance no favours.  With rich, quasi-Impressionist harmonies and layers upon layers of shimmering, ecstatically unresolved harmonies – the composer’s way of representing Ariadne’s longing for Theseus, perhaps? – it was rather haunting and did not outlive its welcome. 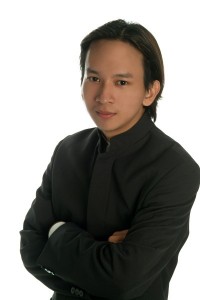 The full orchestra performed in Mozart’s Piano Concerto No.21 in C major – here played by veteran Singapore pianist, Albert Lim (left), now a member of the faculty of the School of the Arts. Self-effacing in the extreme, his playing sometimes came across as austere and careful, though that didn’t prevent some less than pristine passage-work. But perhaps that was in itself a measure of how difficult it is to play Mozart ‘just right’. Certainly the   solo part could have sparkled more – as it certainly did in the cadenzas (Perahia in the first movement, Serkin in the last). As for the orchestral contributions ensemble was often messy and despite the conductor’s efforts I can’t say any satisfactory dialogue was established between the orchestra and soloist. The slow movement turned beautifully, however, with Albert’s pellucid tone working hand-in-hand with his unfussy playing to bring out Mozart’s lovely melody.

One might have thought that Scheherazade  would have fared the worst, given its relative technical difficulty, but with Adrian Tan’s direction and strong narrative style, life was breathed into the tales without this warhorse sounding overwrought. Certainly there were moments where the spotty ensemble work worked against this, but at least the strings did not sound as threadbare, with the winds and brass giving some much-needed support. Shining here were the principal oboist, whose contributions were balm for tired ears, as well as the lead cello, whose statements were never less than musical. Not as pleasurable was the orchestral leader Peev, whose arthritic stabs at the solo part were compounded by a tendency to play sharp. It was nevertheless an exciting account whose effective climaxes and spirited playing resulted in a performance greater than the sum its parts.

I’m not that much of a internet reader to be honest but your blogs really nice, keep it up! I’ll go ahead and bookmark your site to come back later. Many thanks