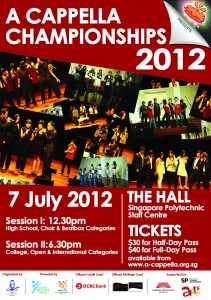 Going to the A Cappella Championships – my first – was like stepping into an episode of Glee-goes-to-sectionals, with all the thrills and spills you might expect of a vocal competition. Tears were shed, notes were cracked and songs mangled, but all in great earnest. We attended the 6:30pm session featuring the College, Open and the curiously non-contested International category.

Amelia Alder was guest adjudicator for this vocal fest, and I happened to be seated just left of her, so I had a reasonably good idea of what they were listening to. Two used iPads, while Alder brought a laptop to take notes and tabulate the results.

Six groups contested the College Category – So Fly from SMU, That A Cappella Group Too (ITE), Pitch Please (ACS (I)), Vocal Jam (SMU), That A Cappella Group (ITE) and Rhapsody from Republic Polytechnic, taking us through renditions of  such pop favourites as Amy Winehouse’s ‘Rehab’, with flamboyant moves from a slender make chorister, the inevitable We Are Young, by ACS (I), whose rendition was however a little stiff. Maroon Five’s ‘Beauty Queen’, by Vocal Jam, ‘This Love’ by That A Cappella Group (TAG) made appearances. TAG performed creditably, with three rather radio-friendly voices in their midst and went on to sweep the Gold medal together with their other chosen songs, Stevie Wonder’s Master Blaster and Somewhere over the Rainbow. The most cohesive of the participating groups, there was a sense of fun, too, with their vocal percussion solo leading to a seemingly impromptu dance by their group’s Harry Shum Jr, to the delight of the audience. Their’s was, of all the groups, the closest to an actual performance.

The Open Category featured more seasoned groups with the likes of Voix-La! (SMU), The Tembusu Treblemakers (NUS), The Syncopaths (SMU) and NUS Resonance, the latter the winner of last year’s championship for their category. Though more polished, they were also less fun, with more, shall we say, introspective numbers – Imogen Heap’s ‘Hide and Seek’, for example, and Gotye’s ‘Somebody That I Used To Know’ – sung twice by The Tembusu Treblemakers as well as the Syncopaths. Voix-La!’s ‘Hey Jude’ and ‘You and I’ mash-up was fun and pretty successful. But in the end, they were just edged out by NUS Resonance’s ‘Isn’t She Lovely?’, ‘She’s Always a Woman’ and ‘Can anybody find me somebody to love’ (Queen), whose even vocals, though lacking star quality, were good enough to win take top place.

The all-male A-Five, the International Category’s sole participant, was less of a competition than a mini K-pop concert, charming many of the ladies with their suave moves and fairly seasoned vocals. No prizes for guessing who won here.

A few words. I’ve always thought that a cappella singing was about listening to your neighbours as much as it was about singing itself, and sadly some groups of this evening proved just that. The groups that performed best worked well together and while featuring star soloists, didn’t neglect to work well with their fellow singers. Often the vocal percussionist drowned out the rest of the singers, and pitching was frequently a problem. It’s telling that the least intrusive (and most pleasant) vocal percussionist was the lady in Voix-La!

Despite the aforementioned song-mangling, it was a hugely enjoyable way to spend an evening, and long may the competition continue.

Music, the food of the soul. A cappella, music in its purest form. Do you know having a vocal exercise can tone your muscles and help burn fats too. Found that out. Love music, live it

Although Resonance is technically better, I enjoyed Voix-la! performance more. Voix-la! did more recent songs, had stronger solos and a fantastic vocal percussionist! Most importantly, they entertained the audiences.

I expected them to win but I supposed the Judges favoured technicality over entertainment.

Indeed it was entertaining.

I felt that Voix-la! was robbed off the title. They were much more entertaining and had better soloists. Overall, I felt that their arrangements were riskier, and they pulled it off, it was also accredited with the help of their amazing vocal percussionist.