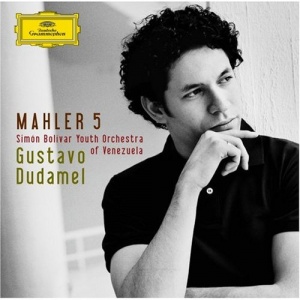 There are good things to be found in this recording, most of which arise from the virtuosic playing of the young musicians in this orchestra. Unfortunately Dudamel favours flash over substance in this symphony, which requires a firm hand to prevent it from becoming merely another concerto for orchestra. Heavy handed in his rubato, handling of transition passages and often at odds with the music, Dudamel’s first two movements fare well enough, despite lack of tension in the second movement – hardly with greatest vehemence – and lack-lustre solo parts.

The Scherzo isn’t given room to breathe and comes across an exercise in showing off the orchestra’s capabilities; the famous Adagietto, with some wrong-headed, unsubtle glissandi, comes across maudlin rather than passionate, with the climax missing the spot entirely in its general warmth.But it is the final movement, with its contrapuntal threads and constant fugato, that shows Dudamel not to be a very sympathetic Mahlerian. Taken at a nearly aggressive speed, the orchestra admirably manages to keep up, but at the expense of messy ensemble and feeling. The music doesn’t dance the way it can, and the whole thing feels rushed (just 14:08!). Add to that some questionable, and again unsubtle tempo choices (the rush into the coda seems forced, for example) and you have a very unsatisfactory ending to an otherwise unexceptional reading of this (nowadays) often played symphony. The orchestra probably have the chops to play this symphony, just not under Gustavo Dudamel.

Just curious who wrote this review…

Hi, it was written by myself, Derek Lim. Thank you for reading TFI!