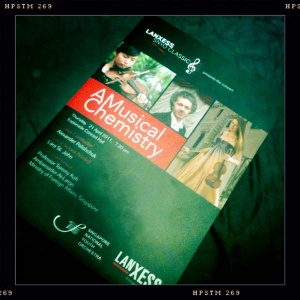 We’ve never had it so good.

If evidence were needed of Singapore’s developing classical music, scene, the inquirer would do well to look not at our only professional orchestra, whose programming has remained fairly staid and unexciting, and whose guest artists tend to emanate from the same stable, but at the mutitude of amateur acts that we now have. The Philharmonia Orchestra, Orchestra of the Music Makers and the Singapore National Youth Orchestra are just some of the names that come immediately to mind.

The last is just one of the high-profile orchestras that the spotlight turned upon. With a three year partnership with LANXESS, the SNYO, made up mainly of school children between the ages of 12 and 18, has funding to study with some of the best local trainers so they may fully develop their talents, the fruit of which were on display tonight. The concert was led by guest Alexander Polishchuk, with Canadian violinist Lara St John performing the Tchaikovsky, and if I were to be honest, the young musicians deserved better from both of these seasoned performers.

The opening ‘Meistersinger’ Overture was remarkable for its lack of sensitivity to mood and colour, despite its very promising, richly-sounding opening with some nice wind contributions. The strings were made constantly to play legato at the expensive of lightness and propulsion, resulting in musical sludge.Disappointing in an entirely different way was Lara St John, whose offensive attack on the Tchaikovsky violin concerto revealed a different sort of musical cynicism.

Though she’s released many an album, Lara St John’s early record of solo Bach remains, for its cover art, the most controversial, sporting as it were the violinist with her chest barely covered by her violin, a record whose artistic merits, however, far outweighted its controversy. It’s an album I still recommend. I’ve always wanted to hear her in concert, but her performance tonight was something I’d rather soon forget.

Wearing an emerald dress and statuesque in her height, the Canadian violinist sported a towering presence that failed to translate to musical heights. While she probably possesses the technical chops to play the demanding part (I use ‘probably’ as there were a couple of chordal spots in the first movement which she had to retreat to slower tempo, and which I’d give a benefit of a doubt), her delivery lurching from phrase to phrase, with often unmusical glissandi and unwritten microtones as well as spots where notes just weren’t clearly articulated within a single bar, such that they were inaudible.

Overall it gave the impression of a superficially flashy reading that more interested in pursuing the dramatic possibilities than exploring the musical depths of the work. Incidentally, St. John played what seemed to be a hybrid-Auer version of the cadenza. The Canzonetta’s chaste melody also suffered from the lack of a straightforward delivery, fussy and with a preening vanity that detracted from Tchaikovsky’s homesick ode to Mother Russia.

Moments of fleeting beauty where she connected with the music only served to contrast against the many instances where she didn’t. The finale, though superficially exciting, suffered from many of the problems that plagued the first.

When I spoke to Ms St John later to convey my feelings on the performance, bringing up, as an exampe, the copious unmusical glissandi, she graciously thanked me for telling her, but said, ‘Well, it is a Romantic concerto.’ I didn’t have a reply ready then, but Ms St John, I’d point you to the great Russian violinists – Oistrakh, Kogan, as well as the non-Russians, who got under the skin of the music just fine without it.

Though much of the accompaniment was rather straightfoward and pedestrian, the student orchestra must be congratulated on the articulate, musical contributions from the various wind soloists, especially the principal flute and bassoon, as well as their attentiveness to the soloist, who must have been difficult to follow.

The second half started off strong, with the SNYO Music Director Darrell Ang’s frenetic ‘Fanfare for a Frazzled Earth’, a five minute, highly Stravinsky influenced (on the composer’s own admission) – swathes of ‘Sacre’ and ‘Petrushka’ with more (as I heard it), Ravel and other ‘Impressionist’ composer’s influence. With strong use of the brass and woodwinds, in some parts heavily contrapuntal writing, it nevertheless kept my attention throughout and was exciting to listen to, even though I couldn’t make out which Chinese tune exactly was used. I liked the arabesques where flutes accompanied the afore-mentioned tunes – very Ravelian. This was the best-played piece this evening, and seems a sure crowd-pleaser, especially with its brevity.

The Franck started off suprisingly well, with lots of energetic, youthful playing that lacked not one bit of passion. Evidently well-drilled, Polishchuk led the young musicians well through a very successful first movement, atmospheric and brooding in the ‘Lento’, with particular attention to dynamics and bursting forth with blazing fervour in the ‘Allegro ma non troppo’. The ensuing two movements, despite some really good work on the parts of the solo harpist, who came forth confidently and strongly, some lovely tone from the cor anglais were, in comparison, lugubrious and lacking concentration.

The SNYO’s next appearance at the Esplanade with the Glinka ‘Ruslan and Ludmilla’, Prokofiev’s Second Piano Concerto, played by Lim Yan and Tchaikovsky’s Fifth Symphony, led by their own Music Director Darrell Ang, looks to be a more successful event and I look forward to hearing them perform with the benefit of more rehearsals with the performers themselves.

Postlude: I can’t let it pass that this concert had some of the most I’ll behaved concert goers I’ve ever had a chance to share a concert hall with. Sitting in Circle 1, an entire row of Caucasian men and women thought it fit to speak, laugh and titter amongst themselves during nearly every single work. A shhh from me shushed them up only momentarily; what’s worse is that other concert goers near them allowed them to continue without comment. Pens dropping, candies being unwrapped, booklets falling and at one point a kid’s toy were only some of the extraneous noises that we had to deal with. Folks, we’re here to listen to the musicians, not to you. It’s only common courtesy.