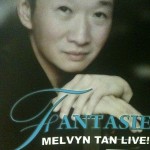 For many, tonight’s concert, quite aside from its musical value, held interest on another front – that one of Singapore’s sons, Melvyn Tan, was returning to give a recital after a hiatus of more than thirty years. The controversy over his self-imposed exile, less polarizing, in fact, than the circumstances surrounding his subsequent return, have seen enough words spilled over the matter. I will write no more on this.

The sheer number of well-known personalities in the audience, political and otherwise, would have alerted the naive concert-goer to the eventful nature of this recital. A sense of anticipation was in the air – would he be up to expectations?

Certainly there wasn’t anything particularly ground-breaking about his choice of program, other than its studious avoidance of anything that he was ‘expected’ to perform – his Classical repertoire – given his pioneering efforts in the field of the fortepiano. Rather an evening of ‘fantasy’ pieces, starting with Schumann’s Op. 12 Fantaisie-stuecke, was the order of the day, followed by Debussy’s Images Book I, and after the interval, Chopin’s third Sonata and the Polonaise-Fantaisie.

Tan’s view of the eight pieces that make up the Schumann was rather idiosyncratic, starting off with a more lugubrious Des Abends than I would have cared for. His approach seemed to bring out the quirkiness in each piece rather than to find similarity and make the suite apiece – the Florestan and the Eusebius aspects of the music – that made the performance seem more symphonic in scope. Tempi tended toward the brisk in the faster pieces, rather breakneck in some, beginning with a passionate, almost vehement attack at Aufschwung, with plenty of virtuoso display. Among one of the more successful of his interpretations was the famous Traumeswirren, where he produced a pellucid, almost transparent, tone in that recurring theme.

Personal though his Schumann was, it was put in the shade by his Debussy. A word here – he studied with one of Debussy’s students, who taught him how the composer might have wanted his music performed. In that most impressionist piece, Reflets dans l’eau, his performance was simply breathtakingly beautiful, which was not to say that it was taken slowly, in fact, tempi were fleet, with a different sound produced from the piano, something a little glassier, a little lighter, more brittle, than in the Schumann. It was a straightforward performance which didn’t shy away from rubato when he felt it was indicated, and refreshingly unfussy. Still, he accomplished a richness and fullness in the chordal material that projected well into the concert hall. Hommage a Rameau, while again on the slow side, was eloquent with very careful use of the sustain pedal; Mouvement displayed tremendous energy that never flagged.

Staying in Paris, we were treated to a second half of pure Chopin. His Polonaise-Fantaisie isn’t one of my favourite pieces; it takes a very special pianist to make it work for me, and I wasn’t convinced by this. His open attack at the piece was, for me, slightly at odds with the more pensive nature of the work, and his fleet tempo as a whole took away a little from that more introspective Chopin that I prefer. Rather, he emphasized more the Polonaise than the Fantaisie element, the rhythms of that nationalistic dance brought to the fore. He didn’t settle into the piece, for me, and I felt that it remained rather on the surface, with even the climactic coda robbed of its triumph as a result.

His Third Sonata was similarly treated to a quick tempo in the opening movement, more an Allegro con fuoco than a Allegro maestoso, with little relaxation until the the second subject’s lyrical theme. Played rather straight again, it was rather low on subtlety and contrast within the movement, though palpably, and constantly high on energy. In the constant aggressiveness of the playing, it tired the ear and I wished there was more variety in the performance as a whole. What it did show was that his technique was not at all wanting and seemed to challenge those who might have thought of him as ‘simply’ a Beethoven and Mozart specialist, a label he has cheerfully shrugged off.

When I spoke with Melvyn Tan for Time Out back in November last year, he came across as someone very private, unwilling to reveal much about himself. As a pianist, he is another persona completely. While at times restrained and not moving very much, engages in a degree of swooning, crouching and posturing at the piano that, were they not so musical, might have distracted from the performance and might even be described as Lang Lang-esque (which is not a compliment, by the way).

Sometimes he would look away from the audience (as many others have similarly done), often his left foot would be in mid-air engaged in some Gouldian dance, others, as his right hand played a melody or a figure, his left hand would grip the lower end of the keyboard between the fingers and the thumb, a strange movement I’ve never seen any other pianist do.

On completion of a work he would swing languidly with his outstretched hands from the left side of the piano to the right to face the audience, his body strangely boneless in that gesture. Often he was crouched (in a posture any piano teacher would be horrified to see their students adopt) over the piano in order to create a certain sound. Between pieces he would beam at the audience in  unadulterated pleasure, in a oddly childlike gesture not unlike a school kid pleased that we had all come to see him and actually liked it.

The three encores were well-chosen – the first, Chopin’s Etude Op. 10 No.8 , clearly chosen to show off his suppleness despite the rigours of the entire concert, which he displayed in his right hand but in doing so didn’t voice the left hand very clearly. The second was the second movement of Mozart’s Sonata ‘Semplice’ – raptly played, and beautifully so, even Romantic in its phrasing and use of rubato. Melvyn Tan prefaced this by saying that the last time he played this was in the Victoria Theatre, when he was about 12.

The third, Chopin’s ‘Revolutionary Etude’ was aptly chosen to end the evening on the high note; despite his right hand octaves, which didn’t sound twice, it did the job and more than half the hall rose to give their ovations. An ironic ‘nationalistic’ choice of piece to end a long-awaited home-coming in the face of objections not yet entirely quelled? Whatever it was, the audience made it clear that Melvyn Tan would be welcome back, any time.

Thanks for a well-written review. I was also at this concert and although I generally agree about your thoughts, the Polonaise-Fantaisie was actually in my opinion one of the most successful performances. It is, however, an odd (but beatiful) piece!