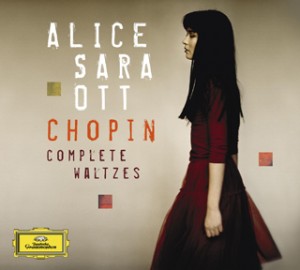 Alice Sarah Ott is a new name to me, but her beguiling account of the Chopin waltzes, sparkling, volatile and searching, has put this Japanese-German pianist on my radar of pianists to watch.

Just twenty-two years of age, she seems to have been picked up by Deutsche Grammophon. And all the better for her, as she has that balance of temperament, imagination, technique and tone, that will carry her far.

She plays the entire set of waltzes, including the posthumous ones, which come after the published ones. Some may find her approach eccentric. Not at all stingy with her rubato, she invests each waltz with a generous amount of it, though it always comes across so naturally that it never feels forced.

Her enchanting way with these waltzes captures at once their melancholy and magic, yet it lacks none of the fun and sparkle when the music calls for it. Sometimes impulsive, often surprising, never formulaic, she keeps them in their original published order, unlike Lipatti’s more original re-ordering.

But her playing is not in the least unoriginal, as I have said earlier. She illuminates the dance element of these ever-popular works and sometimes one can nearly her the orchestra that she conjures up, and see the various stages of the dance – here an older couple, there a much younger one, taking their paces.

Keeping the flow going (her tempi range from middle of the road to a little fastish without being manic), she somehow controls a narrative threading the various waltzes so that one seems inevitable after the one before it.

The entire album bears repeated playing, as it becomes somewhat of a journey of the waltzes, and I strongly encourage you to listen to it.