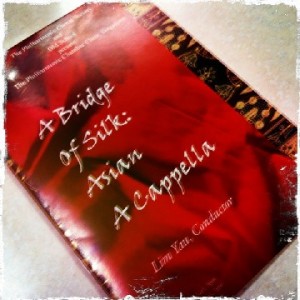 A Bridge of Silk – Asian A Cappella

Take a bunch of truly dedicated singers and mix in a conductor known for his stellar work with choirs. Add a pinch of dry humour, pitch-perfect selection of some of Asia’s finest a cappella music. Mix well, and you have the makings of a tour de force of the genre and one of the most enjoyable choral concerts to have come my way, bar none.

The Philharmonic Chamber Choir (TPCC) are hardly new entrants to the scene (they were formed in 1994), but  they have out-lasted many of the younger pretenders, and this performance shows why. Taking notes during the performance, I found myself writing again and again on how tight they were as an ensemble, blending remarkably well in spite of their small size, and marveling at their ability to negotiate thickets of notes as a single unit. The singers, in their twenties, thirties and forties at a glance, may be older, but the maturer voice has a reliability that the younger voice may lack; certainly there were no weak spots here.

The expert programming of the repertoire, a mix of 17 numbers from ballads to faster-paced pieces, allowed the choir to shine. Most were folksongs, coming from as diverse regions as Bali, for example, in the challenging opening number, Janger, where the choristers become members of a gamelan orchestra, with the odd vocal cymbal added here and there for spice.

The Philippines, that land so well-known for their singers, was represented not once, but thrice – the swooping, atmospherically repetitious and deliciously unrefined Chua-ay, sung in Ingorot dialect, Usahay, a lovely, lovely, lyrical outpouring of sung that was injected with real warmth and colour, and Pokpok Alimpako, a tongue-twisting children’s song sung in Maranao dialect which had the choir inexplicably collapsing in raucous laughter.

A foray into Chinese folksong, including a bit of the familiar in Jasmine Flower, right after the break, was nearly a given, since most of the choir are Chinese in ethnicity. But the choices here were again inspired, – with a sepruchal Awariguli, hailing from Xinjiang (too short, certainly!) following Diu Diu Dang Ah, a highly enjoyable onomatopoeic Taiwanese song in that other tradition of a cappella train songs, replete with choo-choos and engine noises.

It wasn’t all folksong. Toru Takemitsu was represented by three songs:  the somber anti-war Shinda Otoko no Nokoshita Mono wa, or ‘All That the Man Left Behind When He Died’, his arrangement of Sakura and the breezily whimsical A Song of Circles and Triangles.

The latter was an excellent foil to what I felt was the highlight of the evening –  Geonyong Lee’s  (b.1947) Mueonga Nepyeon or ‘Four Songs Without Words’. Far from being Mendelssohnian, the four songs bring the listeners through an imitation of the Korean kayageum, or zither, Korean court music, a motoric moto perpetuo of vocalization in the third movement. In the last movement, purportedly a lullaby, the repeated ‘ja jang’, meaning ‘rock-a-bye, baby’ gave way to a nearly funereal sadness, like a threnody, that was overwhelming and moved this listener to tears. Is the infant truly just asleep?

A question for another concert, perhaps. For now, I’m convinced that you don’t need to look beyond our shores to experience really top-quality choral singing. Capture the essential elements and emotional pitch of each song, the Philharmonic Chamber Choir and Lim Yau continue to be a force to be reckoned with in Singapore’s increasingly vibrant classical music scene. Long may they continue to do so.