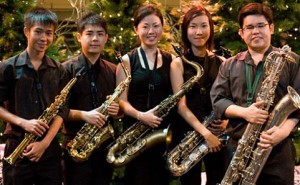 It’s one of those happy coincidences that when the Belgian musician Adolphe Sax invented the saxophone in 1841, he gave his name to the instrument whose sound today is immediately redolent of that usually nocturnal amorous activity – sex.

It’s another that my interview subjects, PhilSax, recently admitted another member to their usually five-member ensemble, making it a sextet. A little too much sax, perhaps?

Not for 27-year-old saxophonist and engineer Yap Sin Yee. ‘The saxophone comes in four main sizes – soprano, alto, tenor and baritone – it’s unique in the sense that though it is the same instrument, it ranges from really high sopranino to the really low contrabass. It’s a whole spectrum of sounds and tonal colour and can be really impressive when put together.’

Although the saxophone was conceived as an addition to the orchestra, it has never been truly accepted and is used primarily for colour, for example, in Rachmaninoff’s Symphonic Dances. But the military band and wind ensemble embraced it with open arms, and its sound is synonymous with jazz and the blues.

‘Through the years, however, the versatile sound of the saxophone meant that many composers and arrangers have rewritten classics for it. One of the pieces that we’ll be playing for the recital, Piazzolla’s ‘Histoire du Tango’ (‘The Story of the Tango’), is a transcription from the original one for flute,’ explains baritone saxophonist and teacher Lionel Lye, 28.

Other works planned for that evening include Japanese animé selections, as well as jazz favourites ‘Fly Me to the Moon’ and ‘The Pink Panther’. ‘There aren’t many saxophone ensembles in Singapore, so I hope that we will be the first to really make a stamp on the local chamber music scene,’ Yap says.

How do six free-minded (if you follow the stereotypes) saxophonists play together in the disciplined world of an ensemble?

‘It’s true that we tend to be free spirits, not entirely willing to be reined in by convention,’ Lye says, ‘Perhaps it arises due to our sense of displacement – we’re technically woodwinds, but we’re made of brass; yet because we use reeds to produce sound, we’re not brass. But we enjoy playing in the ensemble, though we also love to tweak things a bit sometimes. Perhaps that’s due to the common use of the saxophone in jazz improvisation.’

How about, ahem, the other stereotypes?

‘According to people around us, we male saxophonists shouldn’t have problems baiting babes with our sassy manipulation of the sax’, adds Lye. ‘But we disagree, we’re pretty much stable people, sometimes even mundane to a fault!’

PhilSax plays the Esplanade Recital Studio on 21 Sep 2010.
This article first appeared in Time Out Singapore September 2010 and is reproduced with permission.

I think that since the saxophone was born it became a public performance of music for everyone. It has many rich audio make people feel inspired.