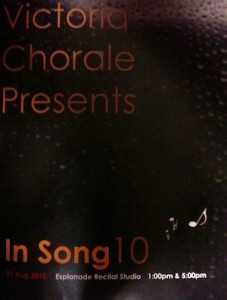 It’s safe to say that Singapore’s choral scene has nothing to worry about. About every other junior college choir has travelled overseas and taken part in competitions and come back with awards. So what happens to them after they graduate?

Ask the select alumni of Victoria School and Victoria Junior College choirs. Inaugurated in 1988 and 26-strong, Victoria Chorale are made up of some of the most talented members of the two choirs.

This year, their program was entirely a cappella. Impressive in their ability to sing difficult, complex parts entirely without music, the choir confidently bringing forth sacred music ranging from Vytautas Misknis’s Cantate Domino and O Salutaris Hostia under Nelson Kwei, who has for years now been considered a doyen of choir conductors. Cantate showed off some of the pure, effortless high sopranos that the choir has in no short supply, though there were tuning issues in the higher voices sometimes under the note and O Salutaris was impressive for its nearly magical fugal parts in the sopranos and altos, with the men, especially the basses sometimes not making themselves felt as much as they could have.

A few solo voices were exhibited to good effect, with Wenxiu’s pure soprano, sans vibrato in Javier Busto’s Pater Noster, and Marie in Ave Maria Stella’s bell-like voice a perfect foil for the extraordinary choral effects that the Spanish composer calls forth.

The choir’s technical prowess was not in question, but less ‘slow music’ would have made for a greater contrast, as it took on mainly ballads, slow pieces and spirituals (a lustily sung and hauntingly arranged Shenandoah), making for a rather homogenous experience. When toward the end, they tackled the folksy ‘Mermaid’, ‘Blow Away the Morning Dew’ (best-known in the arrangement by Ralph Vaughan Williams) and Africa (by Toto), the audience, a fairly well-behaved young crowd, responded in kind with cheers and applause, bringing the challenging concert to a natural close.