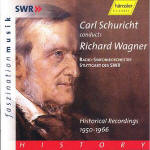 This is the sixteenth volume to emerge from the vaults of the Stuttgart Radio Symphony Orchestra featuring the conductor Carl Schuricht, well-known by collectors but eclipsed, largely due to the scarcity of his studio recordings, by his contemporaries. Schuricht was known for his performances of Bruckner his studio recordings of the eighth and ninth symphonies stand amongst the best in the catalogue – so it isn’t surprising to find him so comfortable in Richard Wagner. Both require a keen eye on structure and the long line.

As performances of Wagner go, Schurichts are comparatively restrained, not as impassioned or (seemingly) improvisatory as Furtwängleror Bruno Walter, yet in some parts (listen for example, to Siegfrieds Funeral March), it can be equally ecstatic, though this same restraint means that the climaxes in Tristan und Isolde shy away from the erotic intensity that others bring to it, the waves of musical sexual tension still there but muted somewhat. Three excerpts from Parsifal are presented here the Act I Prelude, Good Fridays Spell as well as the Finale from Act III. Parsifals austerity yet rich lyricism, contrasted with the subject matter may repulse some but there is no question of Wagners mastery in the music for orchestra alone and Schuricht is as at home in this as Knappertsbusch or Clemens Krauss.

The Stuttgart Radio Symphony Orchestra plays no worse than other orchestras of the period and sometimes better, but they yield noticeably to later recordings in terms of technical excellence. Siegfried Idylls exposed orchestration shows this up most clearly the strings dont have the sheen nor the brass the clarity of articulation of later orchestras (nor, it must be admitted, the accuracy), but the woodwinds fare very well indeed in their obbligato parts. The performance of this music, first played with a handful of musicians to welcome the birth of Wagners son, Siegfried, is chamber-music like and touching. Schurichts outstanding balancing, evident in all the other works as well, comes through quite clearly even in the monoaural sound which happily never sounds congested in the least and come across without distortion at all. Highly recommended to those interested in Schurichts art and splendid Wagner.