This is not my first encounter with violinist Jennifer Koh – the Inkpot Sibelius Nutcase (a.n.k.a.* me) reviewed her BIS recording of the Uuno Klami Violin Concerto back in 1998,  right here at The Flying Inkpot.

*all now know as.

Back then, Miss Koh, who is Korean-American, had just relatively recently burst onto the classical music scene, having won the Tchaikovsky Competition in 1994. Beyond the Klami recording, I must confess knowing nothing about her. Partly because, of course, I “disappeared” from the classical music scene in 2002, due to the demands of work and in particular, parenthood of the very hands-on variety.

Now, 8 years later, I have “returned” to writing – albeit intermittently.  Due to my exposure to Web 2.0 at work, I’ve finally started my own blog, dustofhue.com (*shameless plug*). My boss had been encouraging me for some time.  Once I understood the publishing prowess of wordpress, blogger, and like platforms, I realized straightaway how much more we Inkpotters could’ve done if we had these back in 1997.

The blog as a technology was exactly what we needed – easy publication, easy customizability, easy image management, archival and searchability, etc. Gosh, it would’ve been perfect. And comments. The Flying Inkpot was probably one of the early websites experimenting with comments on our reviews. This was provided because we believed in providing an alternative voice in the arts scene that was open to feedback, that arts reviews needn’t be done by “professional reviewers” – if there is even such a thing.

But because ours was a job run by passion, the moment other priorities loomed, it was doomed. Such was the case for me, back in 2002. My sincere thanks to Derek Lim, who wrote so much under my editorship, for taking up the reins when I could not. The reason I am writing here again is because of his efforts keeping The Flying Inkpot’s not-unfamous Classical Music section alive.

Jennifer Koh has come far in her career, and come to Singapore – by no small gesture of fate since she replaced the original soloist in this concert – to let us hear her Sibelius. Little did I know this would come to be, 12 years ago when I reviewed the Klami recording.

Miss Koh entered the stage in a regal dark pink dress with a black waist sash, looking exactly like her picture in her official website. The opening solo of the concerto stamps an immediate impression – and I was duly impressed. It was wintry, measured, rapturously still – Miss Koh filled the hall with the cold beauty of her impassioned yet poised song. The lower range of her 1727 Stradivarius evoked the deep tones of forest wood sustaining warmth in the white snow, while the upper notes sang, piercing gently, birdlike alone in the susurrous of the orchestral strings. 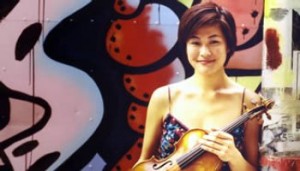 Photo by Janette Beckman, from jenniferkoh.com

Swaying, moving and knitting eyebrows with the music, Miss Koh obviously feels for the work. Widely regarded as an advocate of contemporary music, it seemed to me that even for a relatively “old” work like the Sibelius, Miss Koh treated it with conviction and justice. Her performance showcased her sensitiveness to the soundscape, the phrasing and the emotions of the concerto – this is especially marked by several instances of very well-sculpted and naturally executed rubato, which I found satisfyingly right and delightful. All of Miss Koh’s great qualities came to their height in the finale, especially in the high energy solos. In the cadenzas, she enters a Bachian mode, exhibiting heartfelt depth, flowing without losing structural integrity – a Gothic sound architecture. At the end of the first movement, the audience applauded. To be honest I’m not sure if it was accidental, but I suspect not.

Poise is a word that kept appearing in my notes. In the Adagio, she once again achieved a balance between intensity and that poise, passionate yet gentle. Her violin tone was beautifully consistent – in this gentle music, searching, singing, lilting, yearning, calling, calming. There is strength in the ladylike manner of her interpretation, which suited the music very fine. Miss Koh again showcased her Bachian mode to an enraptured hall when she graced us with an encore in the form of Bach’s Gigue from the Partita No.2 in D minor, BWV 1004, performed at what I realize is pretty breakneck speed, except that it was pulled off without any hint of breathlessness or loss of poise. Wonderful!

The SSO was at its best in big tutti sections sans soloist, as in the Adagio. But elsewhere, I am somewhat disappointed in a couple of things. First, muddy orchestral layers, which is unfitting of Sibelius, master of orchestral transparency. Was it the Esplanade Concert Hall’s acoustics? In the big orchestral climax close to the end, the (wood)winds could not be heard above the outpouring fortissimo of the strings – not an infrequent occurrence in this work, but still not ideal. Second issue: pacing. There are many sections in this concerto where rhythmic devices drive the music’s momentum, but the SSO and Shui Lan’s pacing seemed draggy – and worse, clearly lagged behind the soloist, who was just a heartbeat, sometimes two, ahead of the orchestra. Tempo aside, no matter what, the orchestra should not lack thrust. I think it would’ve been better if they’d simply let loose.

Which the SSO actually did in good measure for the monumentally dignified piece that is Britten’s The Young Person’s Guide to the Orchestra. 20th century British music can sometimes require an acquired taste, and variations are often a variety of interesting and uninteresting mixed together. But I think the SSO did a great job from beginning to end, capturing the quintessentially British qualities of the music, the grey majesty, the strident confidence, that slightly irreverent bluster mixed with grandiose nobility. Earlier I said that in big tutti sections, playing together, the SSO lacks transparency; but on the opposite end, in solos and ensemble play, they do excel, especially the woodwinds.

Speaking of which, one of the most uniformly impressive and enjoyable performances of the night was the Rossini. A fine cello solo (Ng Pei Sian) and cello ensemble (whom Mr Ng obviously wanted to credit) at the onset of the William Tell Overture, followed by a well-paced and suitably grand storm section; then a pastorale filled with warmth and the beautiful contributions of solo flute (Jin Ta) and cor anglais (Elaine Yeo). The great “Lone Ranger” theme was confident, brightly articulated, spritely without being overblown. Not only was the piece rendered by the SSO as a surefire crowd-pleaser, I thought it was really fine Rossini, very Italian, very brilliant.

As I’ve mentioned, since 2002 my concert-going opportunities have been few. Thus it was with some interest that I – and because I was taking notes – note that conductor Shui Lan’s style seems to have evolved. I remember calling him (right) flamboyant – that seems to be less so today. He is much more poised, but at the same time his baton-work also seems remarkably “free”; he phrases a lot, but is no longer flamboyant, and there seems little “beating”, or it is very light. I like it a lot. It was beautiful for Mascagni’s Intermezzo, as well as in the Elgar. But before you think this means there is no high action on stage, let me be clear that he got a massive and spectacular conclusion in the Britten, which elicited well-deserved applause from the audience.

A few days prior to the concert, my fellow reviewer at the Inkpot, Derek Lim – and he’s been holding the reins since I left in 2002 – commented here that I’m in for a treat with Jennifer Koh as soloist. I’m happy to say, he was absolutely right. I thoroughly enjoyed her performance.

Alas, I was not prepared for the opportunity to meet Miss Koh, who came out during the intermission to give autographs. I should’ve brought my Klami concerto CD sleeve for her to sign. While in the queue, I decided – and thanks to the wonders of mobile computing – to bring up the old Inkpot webpage with the Klami review to show her. She smiled and said, “Oh! That!!”, delight sparkling in her eyes. I introduced myself and on a whim, asked her if she could address her autograph to a special person: 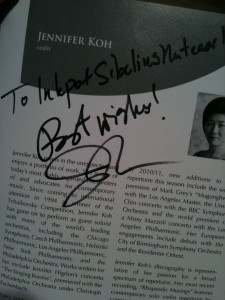 What a delight it was to meet such an instantly warm and friendly personality.  Miss Koh, if you happen to read this – thank you for coming on such short notice. And the Inkpot Sibelius Nutcase thanks you for the Sibelius.