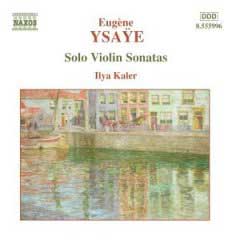 There are some works which should never be attempted – either in performance or recording – unless the artist is supremely confident in carrying them off and has the technique to match. Chopin’s 24 Etudes, Liszt’s Transcendental Etudes and Paganini’s 24 Caprices – all finger-twisters – come to mind. To these one might add the six unaccompanied violin sonatas Op.27 by the Belgian violin virtuoso Eugène Ysaÿe (1858-1931).

Published in 1924, these are to the 20th century what Bach’s unaccompanied Sonatas and Partitas and Paganini’s Caprices were to the 18th and 19th centuries respectively. Ysaÿe realises the polyphonic and contrapuntal possibilities of the violin, and lavishes these sonatas with the full arsenal of technical devices and tricks known to mankind. Running over 70 minutes (in most recordings), they are a fiddler’s paradise, or nightmare. Each sonata is different in form and structure. Each is dedicated to a close violinist friend, of whom at least four are household names for violinophiles.

No.1 (dedicated to Szigeti): 4 movements in the manner of Bach’s Sonatas.

No.2 (Thibaud): 4 movements with the Dies Irae as its main obsession, and quotations of Bach.

No.3 (Enesco): single movement “Ballade”, often performed as an encore.

Unlike Bach’s six-pack, which can be heard at one sitting, Ysaÿe’s half dozen makes more demanding listening. One might be persuaded to listen to two sonatas at a time, a multi-movement sonata followed by a single-movement sonata. For beginners I would suggest No.2 followed by No.3 (or No.6), a comfortable earful lasting some 20 minutes. These are also the two or three most popular and regularly programmed sonatas.

However under Ilya Kaler’s hands, all six sonatas pass like a breeze. So seemingly effortless is his account that one forgets its longeurs or technical difficulties. It is as if this 1986 joint First Prizewinner of the International Tchaikovsky Violin Competition knows no fears. His intonation is spot-on, so squeaky clean (perhaps the wrong choice of words) that some superhuman mechanism is operating behind his fingers. This is not to say that the playing is robotic or unvarying. Far from it, Kaler breathes the music – its peaks and troughs – and traverses all form of dynamic shifts – from pianissimo to fortissimo – so naturally that it is unnerving.

Just sample the first movement, Obsession, from Sonata No.2, which switches gear from the Preludium of Bach’s Partita No.3 to the Dies Irae and back like some crazed Grand Prix driver. The playing is breathtaking, and often hair-raisingly so. I could go on, but its best to let the music bring on the superlatives. As a corollary, I checked out Kaler’s recording of the Paganini Caprices (on Naxos 8.550717), and found it equally enthralling. I would even put it ahead of more famous recordings by Itzhak Perlman or Ruggiero Ricci.

As for the Ysaÿe, good recordings do exist but mostly in the premium-price category. One would look to Leonidas Kavakos (BIS), Philippe Graffin (Hyperion) and Franz Peter Zimmerman (EMI Classics) for excellently conceived and delivered readings. However at super-budget price, there is simply no competition. Benjamin Schmid’s lovely recording on Arte Nova has been “upgraded” to the premium priced Oehms Classics label, so that leaves Ilya Kaler unchallenged at top of the heap. Try it, you will not be disappointed.