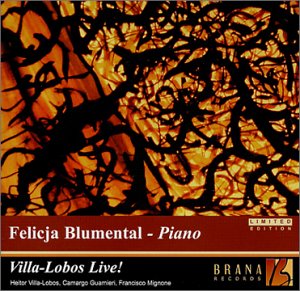 The Brazilian Heitor Villa-Lobos (pictured right) composed a total of five piano concertos. In a way, he reminds me of the Frenchman Camille Saint-Saëns, who incidentally also composed five piano concertos. Both were highly skilled in their art and extremely prolific. These qualities however tended to work against them, with the maxim Quality rather than quantity regularly being leveled to their disadvantage. This unfortunately has the effect of prejudicing one against what can be attractive and well-crafted music.

Like Saint-Saënss five, Villa-Lobos five piano concertos are borne of high Romantic gestures gushing melodies, lush orchestrations and virtuosic piano playing. Unlike a couple of Saint-Saëns concertos that do stand out (notably Nos.2 and 4), the same unfortunately cannot be said of Villa-Lobos. Performances and recordings are rare; I can only think of only one recorded cycle of the Villa-Lobos concertos by Cristina Ortiz on Decca from the 1990s.

This CD is a showcase for both Villa-Lobos and pianist Felicja Blumental. A little bit of history; Blumental was born in Poland in 1908, was a composition student of Karol Szymanowski and later settled in Brazil during the Second World War. She gave the world premiere of Villa-Lobos Piano Concerto No.5 in London in 1955, and recorded it shortly in Vienna (this recording), both under the composers direction. She died in Israel in 1991. Her name however still survives in record catalogues thanks to a number of concerto recordings on the Vox label. Judging from what is heard here, she must have been a considerable virtuoso. 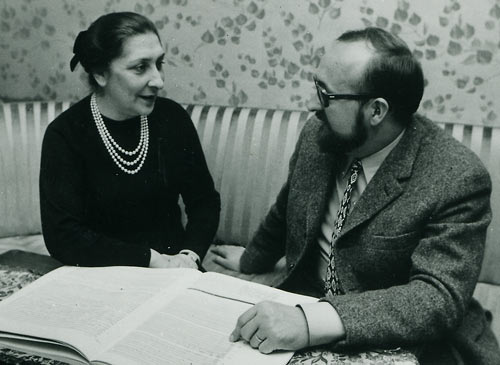 This live performance of the Fifth Piano Concerto lacks nothing in passion and Romantic rhetoric. The outer movements coast through quite busily and excitingly, but it is only the slow movement that is memorable. Its achingly nostalgic melody could only come from the same hand that wrote the famous Aria from Bachiana Brasileiras No.5. Bachianas Brasileiras No.3 is a four movement piano concerto, lasting almost half an hour and seems too long for its own good. Although teeming with thematic ideas, very few stick in the mind despite repeated listenings. Blumentals (pictured above) advocacy, though dutiful, sounds wasted here.

Between the two concertante works are four short solo pieces, which Blumental gives good accounts of. Best known is Camargo Guarnieris Dana Brasileira in a glittering and insouciant reading. There is also a bit of barnstorming in Villa-Lobos Dana do Indio Branco (Dance of the White Indian) from Ciclo Brasileiro.

The recorded sound, taken from 1950s recordings, is less than ideal with surface noise, distortion and sounding especially thin in the orchestral bits but does little to diminish the committed and dynamic pianism. Blumentals memory is probably well served here but those seeking to further their Villa-Lobos listening would want to check out Cristina Ortizs recordings on Decca and EMI Classics.

CDs of Felicja Blumenthal may be purchased from http://www.branarecords.com and Amazon.com