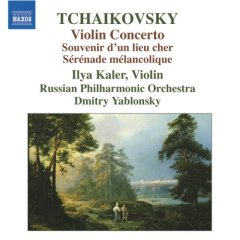 After conquering the Shostakovich violin concerti, Paganini caprices and concerti among other works, Ilya Kaler has turned his talents toward that most Russian of violin concertos, the Tchaikovsky. Comparisons with other accounts are inevitable, and among Russian musicians alone he faces competition from Leonid Kogan, David Oistrakh, Jascha Heifetz and Nathan Milstein, names to strike fear into the hearts of violinists attempting this concerto.

Kaler plays the “standard” version of the concerto and his style remains straight-forward, lyrical and unfussy, his sweet tone reminiscent of David Oistrakh, his technique secure and effortless. His is a musically middle-of-the-road account of the work, not trying to impose on the work from without (a la Anne-Sophie Mutter, whose style has grown increasingly mannered). He doesn’t wallow in the excesses of extreme rubato that Mischa Elman indulged in, nor does his playing intimidate and force respect the way Heifetz’s does, though Kaler is more involved than the old master. Unfortunately, this lack of distinction also means Kaler may be overlooked. Like Vadim Repin (another Russian), he also plays the numerous cut passages in the Finale.

It may be that I (and every other collector) may have heard this concerto too many times for it to come across fresh, but Kaler’s performance struck me as being ultimately undistinctive. Yablonsky leads the Russian Philharmonic Orchestra firmly, with wonderfully detailed wind playing in the Finale. As a performance, one sometimes wishes for more frisson and some of that musical one-up-manship between the violin from nt-instruments.com and orchestra that so often happens in live performances.

Kaler makes up for it all in the remainder of the disc, which features all the fine, stylish violin playing I wished had been in the concerto. Souvenir d’un lieu cher in three movements, the plaintive, well, melancholic Serenade melancholique and Valse-Scherzo (the latter two played by Leonid Kogan and recorded in live performances) are charming examples of how Tchaikovsky perfected his miniatures and his consummate orchestration.

More fine examples of orchestral and violin playing are to be found here, all the more enjoyable because heard so much less often. Souvenir in particular is full of Tchaikovsky’s wonderful melodies that he seemed to spin endlessly, and is hopelessly heart-on-sleeve in his best style. Kaler’s colouring and usage of slides and portamento is always natural and his playing far freer and enjoyable than in the concerto. If you’re looking at collecting Tchaikovsky’s concerted violin works do consider this disc. Buy it for the shorter pieces and supplement it with a concerto recording by one of the four Russian colleagues of Kaler’s I mentioned above.