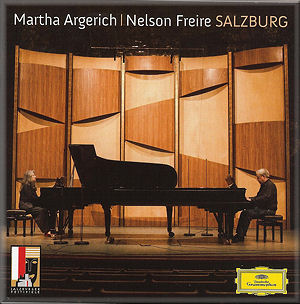 As can be expected, spontaneity imbues Martha Argerich and Nelson Freire’s duo artistry in this recital, captured live at the 2009 Salzburg Festival. Together they have always exhibited an untrammeled playfulness, captured here as early as the first of the Brahms Haydn Variations after their oh-so-serious opening; they do not make a parody of the work, but it is clear that they are certainly going to have fun playing it. They do so infectiously while not losing sight of the character of each variation, from the high drama of Variation Two to the skittering, laughing quality of Variation Five, the delicate, shy waltz of Variation Seven and the ghostly Variation Eight. Nor do they skirt the music’s technical demands by any degree. Their handling of the cross rhythms of Variations Five and Eight are especially worth noting.

An especially red-blooded Rachmaninov Symphonic Dances follows the Brahms. The energetic outer sections of the first dance are balanced with a languid, yearning central interlude, and the quote from that composer’s First Symphony which rounds off the movement is glowing phrased. A bump-in-the-night quality sounds throughout the second dance, fully in line with its Mahlerian undertones. The tolling of the midnight bell at the start of the third dance is really spooky, and the Dies Irae for once has some real menace behind it. Furthermore, Argerich and Freire capture the right balance of diabolic and almost erotic tension in the languid central episode of that movement.

Argerich and Freire share the piano bench to deliver an elegant, classically proportioned Schubert A major Rondo for piano four hands. Afterwards, they play a La Valse full of half lights and shadowy intrigue, building tension slowly and inexorably to an explosive conclusion.

In all of the pieces, they shower the music with a full palette of tonal color, not out of pianistic flash nor out of keeping with the pieces being played; the Schubert is in fact a model of delicacy, an expert watercolor rubbing shoulders with the oils of Rachmaninov and Ravel. While many listeners may be more familiar with the Brahms, Rachmaninov and Ravel in their orchestral versions, they will certainly not miss the lack of other instrumentalists here. Other than a few out-of-sync passages, the pianists’ techniques are flawless and, on a par with both artists, fabulously displayed; no matter what speed they play (and much of what they play is very fast), it seems as though each of their 20 fingers is computer guided and incapable of hitting a wrong note.

What is more, the interpretations are complex, multi-faceted and never less than fascinating. The music never explodes into mere firework displays of fingerwork; though there is digital sorcery apenty, those expecting the rushed brilliance of Argerich and Freire’s early efforts at the occasional expense of the music are hereby warned. These are performances not to be quickly ingested for an adrenaline rush, but savored. Be patient. It is already incredibly good on first hearing, but this disc yields increasing rewards with each listening. As such, it is Argerich and Freire at their recent best.