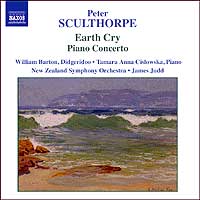 It is surprising, given their repertoire-led imperative (i.e. theirs buyers are attracted more by what’s playing than whom) to put on the market at least one alternative to any piece of music ever composed, that Naxos haven’t reached Peter Sculthorpe sooner. Sculthorpe is probably the best known and most performed of all Australian composers, if only also because he has been active in this field far longer than any of them, having just celebrated his 75th birthday and still composing.

There are two aspects of Sculthorpe’s music which have always struck me as particularly distinctive: first, his easily assimilation and integration of ethnomusicology into his works, drawing on the inspiration of social and geographical characteristics and events of Australia and various countries around the Pacific Rim. The indigenous Aboriginal influence is nigh unmistakable, as well as cultures as diverse as Balinese arja theatre music and Japanese saibara melodies.

Secondly, how tremendously contemporary and prolific his creative response to such external stimuli. When I met Mr Sculthorpe in December 2002 and we spoke a little, he was already writing a requiem in response to the terrorist bombings in Bali earlier that October. (His Piano Concerto of 1983 was written during a particularly tragic period in his life, parts of which had been written in Bali the previous year.) Or his elegy Port Arthur: In Memoriam, performed on 24 June 1996 after it was penned in response to the events of 28 April 1996 when gunman Martin Bryant killed 35 people on a rampage at the historial park in Tasmania which was formerly penal colony. (Composer John Haddock was also deeply affected by Port Arthur. He was just outside the Brown Arrow cafe that day, and the ensuing carnage which he witnessed, as well as the post-traumatic syndrome, would later influence his war opera about the B-17 Flying Fortress Madeline Lee.)

This release contains five of Sculthorpe’s mainstream works, including the Piano Concerto (whose central section contains aforesaid Japanese saibara melody “Mushiroda”) and a revised Earth Cry that includes a new obbligato for didgeridoo. Didgeridoo player William Barton’s association with Sculthorpe began when Barton performed the String Quartet No.12 From Ubirr with the Goldner Quartet at the 2001 Townsville Chamber Music Festival. The inclusion of the didgeridoo into Earth Cry, obvious on hindsight and recorded in this version here for the first time (but only by a whisker – see below) adds a new texture and atmosphere to make for very absorbing listening.

The Piano Concerto has also been recorded before at least twice, Tamara Anna Cislowska with the Sydney Symphony (ABC Classics 8 770030), and Anthony Fogg with the Melbourne SO (ABC Eloquence 426 483-2). Chandos aficionados may remember Cislowska partnering Geoffrey Tozer in the Alan Rawsthorne double piano concerto (CHAN 9125), but here on Naxos, she leaves her own signature in revisiting Sculthorpe’s twenty-minute work. This music is heavily inward-looking and more contemplative than show-offy virtuosic, and Cislowska plays from experience and long association with a heartfelt depth of feeling, perhaps a touch too genteel at times but otherwise giving a very moving performance supported ably by James Judd.

Memento Mori is Sculthorpe’s oblique reference to the sculpted stone heads of Easter Island, and the mysterious legacy of the islanders who were believed to have despoiled the environment of its resources, then turned on each other and wiped themselves out. Sculthorpe’s environmental allegory draws on the traditional Dies Irae as well as a ground alternating between G and A flat, the pitches which astronomer Johannes Kepler believed to be “the sound of the Earth.” Judd begins quite coolly, even a tad clinical, but this adds considerably to the gravitas in the last one-third of the work where Sculthorpe’s music unfolds from tragedy to redemption.

The term Kakadu already has a place in classical music in Beethoven’s Piano Trio No.11 as the “Kakadu Variations”, the German kakadu refering to “cockatoo”. Sculthorpe refers here, naturally (excuse the pun), to the Australian Kakadu National Park, and more specifically, the Kakadu language which the native inhabitants speak. What makes this performance remarkable is Judd’s curvaceous, expansive view of the Aboriginal character of the music, as well as the solo cor anglais in the central section which deserves a mention. From Oceania comes from Sculthorpe’s Japanese “Sun Music” period and, eschewing melodic and harmonic development in favour of rhythmic percussive effects, provides an interesting contrast to the other works on this disc.

What makes this release especially interesting is that it comes just as ABC Classics has released its own Sculthorpe anthology (ABC 476 192-1) almost simultaneously, also featuring William Barton in Earth Cry, and with Michael Christie conducting the Queensland Orchestra (for whom Sculthorpe is Composer Emeritus). This album contains considerably more music for didgeridoo and orchestra, including Songs of Sea and Sky, a full orchestral arrangement of From Ubirr, plus an overlap of Kakadu and Earth Cry with this Naxos disc. Serious collectors will want to get both, of course, but for those who have to choose between two superbly performed and engineered discs, the Naxos will probably be easier to find and has the edge in terms of cost, too.