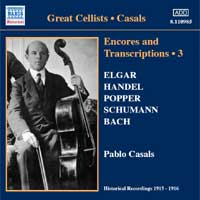 Making albums of transcriptions and encores wasn’t always the slightly mawkish thing that people think it is nowadays, and many would sniff at them nowadays. But the greatest of them did it — Fritz Kreisler revelled in his many transcriptions of various works by imaginary composers, Ricci borrowed Chopin’s Nocturnes and made them his own, even Heifetz did it, with his Gershwin transcriptions. 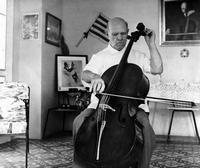 Cellists have always had a dearth of good encore pieces to play beyond the obligatory The Swan and Popper short pieces; this disc is no different, except that it features the man whom everyone agrees started it all for the cello — “Pau” Casals. At risk of seeming ungrateful, I wonder why Casals decided to record all these little bon-bons instead of something more substantial when he entered the studio (the notes, written by the always informative Tully Potter say that Casals was only lured to the recording studio in 1915, after taking an American wife), such as finishing the cello suite recorded here only in part.                     (above: Casals tunes up)

The aforementioned The Swan is here, dignified and elegantly played, as is Salut d’amor, fair enough game for the cello, I suppose, very stylishly played and reminiscent of Kreisler, but so are minor pieces like Rubinstein’s Melody in F, a popular work in that time, and a charming Romance by Campagnoli. The Faure transcription is so persuasively played by Casals that one might forgive oneself for thinking it was written for the cello.

The most substantial work here is the Kol Nidrei by Bruch, and Casals is backed here by a studio orchestra. Last heard on an EMI References recording, it here sounds better than before, and his performance is most persuasive.

The indelible impression one goes away with after listening to this disc is Casals’ beautiful, individual tone, and also, how much his playing had sadly deteriorated by his later years, though the music was always there. The Bach suite excerpts only highlight this – the insights into the music here yield nothing to the EMI recording of the full suites made years later, yet the right hand for one exhibits better control. If only he had made them earlier. But he lived in a time when recording techniques were in their nascent stage, and the sound of these recordings, though scarcely unlistenable, was still not as good as the Bach suite recordings.

This album, then, is recommended to all interested in the cello, Casals, or both.