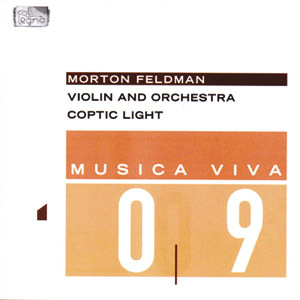 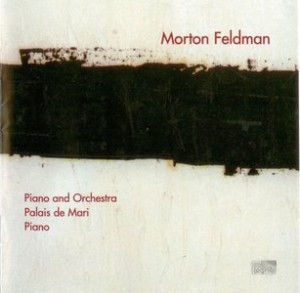 I have just discovered a composer whose music I can de-stress to. It isn’t Bach, Mozart or Satie, but the American composer Morton Feldman (1926-1987). Okay, so Feldman (right) isn’t totally new to my ears but for some years, I have been treating insomnia (mine, not my patients) with his 80-minute long Piano and String Quartet. That Nonesuch disc by the Kronos Quartet and pianist Aki Takahashi is worth much, much more than a bottle of Valium.

Its not that it’s boring. Feldmans music just puts ones brain into a state of mind for complete relaxation. Spas should try it. More seriously, his music totally defies what is considered classical music, or concert music, or music as we know it. Avant-garde? Post-avant-garde? Atonal? Polytonal? Experimentalist? Minimalist? Installation art-music? Nothing quite seems to fit. This music cant be pigeon holed; it just exists.

Like his more famous compatriot John Cage (1912-1992), Feldman thrived in the age of experimentation that defined the avant-garde movement of the 1950s through 70s. Together with Cage, Earle Brown and Christian Wolff, they were known as the New York School, a movement that allied itself with artists such as Mark Rothko and Philip Guston. Labels aside, Feldman is and sounds different from Cage. Both however had a penchant for lengthy works. The Kronos Quartet attempted Feldmans Second String Quartet but even they could not stay the course of its five and a half hours.

These two well-filled discs provide an illuminating window into Feldmans world a timeless journey into sound textures quite unlike any other. The works come from the last 12 years of Feldmans life, a period when he returned to conventional scoring as opposed to graphic scores. The generic titles of the works also provide a clue to the spareness of his musical textures. Violin and Orchestra and Piano and Orchestra simply state the medium of performance, yet these arent a violin or piano concerto in the conventional sense. And one cant get more minimalist in naming a 30-minute long essay for piano simply Piano.

So what do these pieces sound like? In Violin and Orchestra (1979) and Piano and Orchestra (1975), the solo instruments become one with the orchestra, as part of a unified musical fabric. One can hear the solo violin or piano distinctly, yet they do not stand out like in a conventional concerto. That is not to say that the solo parts arent virtuosic. The virtuosity is in keeping concentration through an extraordinarily long period of time, maintaining an individual voice yet being part of the ensemble. Violin and Orchestra lasts nearly 50 minutes (longer than most performances of Beethovens Violin Concerto in D) while Piano and Orchestra is but a brief 20 minutes. Both are played in one single movement each a seemingly amorphous morass of sound that varies little in dynamics and seldom rising beyond pianissimo. There are hardly any themes or motifs to speak of, just series of chords and arpeggiated notes of various timbres played over a quietly humming and throbbing background. Deep within each work is a never-ceasing pulse, one that varies with each heartbeat and intake of breath. This pulse of life is what makes each work come alive. 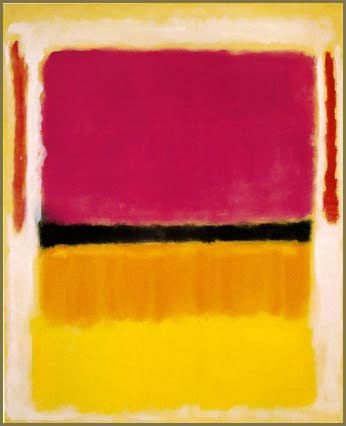 A suitable visual analogy would be a typical painting by the American artist Mark Rothko. His minimalist canvasses have been much copied, parodied, celebrated and vilified vast expanses of grey, brown, black or what have you, with the occasional swathe of colour. Everything is understated, seemingly static and with as little variation in shade or texture as possible, but there it is staring at you and awaiting a response. My preferred analogy would be sitting for an hour or two in the Zen rock garden of Kyotos Ryoanji Temple watching sunlight fall and shift over its fifteen stones, casting their short shadows on the sand beneath. Time stands still and you have the serene and tranquil feeling of not wanting to be anywhere else at that point of time.   (left: Mark Rothko Red, Orange, Tan, and  Purple, 1949)

There cannot be enough praise for German fiddler Isabelle Faust who bravely takes up the challenge of Violin and Orchestra and shines through this test of endurance. Her well-timed solos cut through the wads of sound like a surgical laser, illuminating and searing an indelible impression onto the proceedings. Pianist Markus Hinterhuser seems to have an easier time given that Piano and Orchestra is a much shorter work, and his part consists largely of widely spaced chords and arpeggios, but I seriously doubt it.

Piano and Orchestra then gives way to two of Feldmans major piano works Palais de Mari (1986) and the afore-mentioned Piano (1977). This is nearly an hour of solo piano music consisting of repetitive patterns formed by pulses of chords, appearing and dissipating like raindrops falling gently on a reflecting pool. Somehow, one can sense the moment when Palais de Mari ends and Piano begins; there is a perceptible change in colour that the ear immediately picks up. Do try it for yourself! There is however a wider range of dynamics employed in Piano, where chords played triple forte literally break the silence midway through the work. One could easily get impatient listening to this, hoping against hope for the appearance of a new theme, or some form of development, or for the work to end, but that would be missing the point altogether. It is perhaps an indictment of our listening habits and hectic times that we continually seek Tchaikovskian thrills and spills in concerts and recordings.

One of Feldmans best known and more-often recorded works is Coptic Light (1985). Its relatively compact 25 minutes also make it a potentially programmable concert piece (a likely hit for the BBC Proms!). Feldman was an admirer of Eastern tapestries and carpets; their patterns of light and shade repetitive and otherwise were to vividly capture his imagination. This work, inspired by Coptic textiles that Feldman viewed at the Louvre in Paris, is a musical representation of those patterns. Taking a further few degrees of separation, it is also meant to be a musical summation of an entire civilisation as viewed a couple of millennia later. Profound stuff, one might surmise, but it works as pure music by virtue of orchestral colour in its multifarious guises and its perpetual and life-giving pulse.

There are at least four recordings of Coptic Light in the catalogue. I have not heard them all but the Bavarian Radio Symphony, one of Germanys finest orchestras, is as good as it comes. However, my ideal introduction to Morton Feldman if you can still find it is the recording by Michael Tilson Thomas and the New World Symphony (combining Coptic Light, Piano and Orchestra, and Cello and Orchestra) on the sadly defunct Argo label.

One writer described Feldmans compositions as unanalysable; I am not going to challenge that assertion. As I do not foresee any of these works appearing on the concert stage in Singapore anytime soon (although I wont discount the ever-adventurous Singapore Dance Theatre choreographing Coptic Light sometime), I wont hold my breath waiting for the impossible to happen. I can only hazard a guess that such works might not work so well visually (even with the handsomely beautiful Isabelle Faust gracing the stage) as compared with hearing it through ones speakers, so these discs would do rather nicely.

Morton Feldman represents the benign face of 20th century avant-garde music. Can his work gradually gaining acceptance if the number of recordings is to go by – be called music? Yes. Can it be appreciated and enjoyed? Yes. Can it be ignored? Yes, but life would be much poorer for it.

Tou Liang hopes to visit Ryoanji again. The next time, he will be armed with an i-Pod filled with Morton Feldmans music.