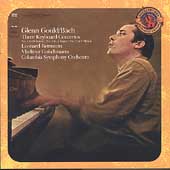 This is the perfect Glenn Gould sampler.  From the drama of the D Minor concerto to the songfulness of the A Major and the Machiavellian intrigue of the F Minor, Gould’s technical clarity and articulation are consistently phenomenal, the music flows smoothly under his fingertips; his eloquence and lack of idiosyncrasy make his these performances among his most approachable and listener-friendly.  Yes, there is Gould’s trademark vocalization, most notably in the slow movement of the A Major, but its a small price to pay for such wonderful performances, not only from Gould but also from the Columbia Symphony Orchestra in this case, a pick-up ensemble consistently mainly of players from the New York Philharmonic.  They, along with Gould and conductors Leonard Bernstein and Vladimir Golschmann, take a chamber music approach, and the resulting interplay between soloist and various members of the orchestra made all the clearer with Sony’s excellent remastering adds to the joy of the overall proceedings. Sony has wisely upped the ante by adding two of Gould’s finest solo Bach recordings.  The 1959 performance of the Italian Concerto is the fleeter-fingered of his two traversals, and it is good to hear the Concerto after Marcello paired with it instead of Gould’s lumpy remake.  The Italian Concerto radiates the same ecstasy in playing that infused the three concertos preceding it two fireballs of extreme dynamism framing a hushed central movement that keeps you at the edge of your chair with its rapt intensity.  The Concerto after Marcello adds wit and, again, intrigue to this heady mix and shows there were still moments, even in the year before his untimely death, that Gould did not take himself as ponderously serious as was his wont.  This, not the final version of the Goldberg Variations, is Goulds most fitting memorial.

One of the finest Masterworks Expanded releases to date.