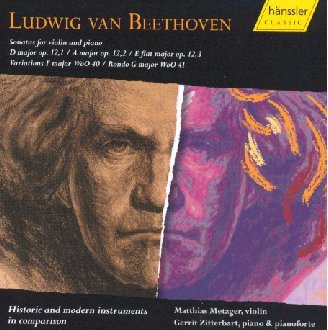 This is a fascinating double-disc set and if I was disappointed, it has more to do with the choice of sonatas – Beethoven’s early opus 12, than the actual performances, which are sparkling, well-judged and full of character. If you raised an eyebrow at the necessity for two discs for just opus 12, you’d be spot-on – the first disc is played on modern instruments, the second on period instruments. Apart from the excellent level of performance, that would be the main reason to give this set another look when you next visit your record store. I’d like to qualify what I said about the disappointment regarding opus 12 – they are very good Beethoven, well-crafted and imaginative works, but compared with the later works they come off looking bad. Metzger and Zitterbart play these so well, though, that I really wished they had recorded some of the later works first before going to the earlier ones – collectors are more likely to sample their work if they recorded, say, the opus 30 sonatas first. If their performances of the later sonatas turn out as good as these and end up not being recorded, the loss is ours. More hectic because more articulated is how I’d describe the period instrument performances turning to them right after their modern instrument counterparts. Some of this has to do with the instruments — the fortepiano, with its propensity to sound like a harpsichord certainly contributes to this, but the difference lies mainly in the way the duo play. Metzger doesn’t eschew vibrato, avoiding that dreadful white sound that some period performers seem to love torturing listeners with, but it is used with more discrimination, to be sure. If anything the performances seem even fleeter though the timings set side to side differ by seconds in the sonatas if at all, more full of character and more generally vehement, which in this music is no bad thing. There is something very beautiful about the sound of the fortepiano especially in the slow movements. Somehow the duo seem more at home with the period instruments – Metzger plays a Joanner Georgius Leeb violin, Zitterbart a pianoforte made by Michael Walker in 2001, a copy of an instrument from Anton Walter, made in 1795 – with the performances breathing more naturally, more easily. In the last movements, especially (you’ll remember that these sonatas have only three movements) the excitement with which the duo play is positively infectious. The period instruments have a way of making the readings seem faster, which contributes without a doubt to the joy of the performances. The timbre and percussive character of the pianoforte influences the performances more greatly than I imagined. For example the mock-angry figures rolling up the keyboard sound comical now, a bumbling oaf tripping over in his enthusiasm. I don’t know Beethoven might have played them, but it certainly sounds right when played by Zitterbart. Beethoven’s musical humour lies strongly in the accents and these are much more easily effectively out on the period instruments. All in all this is a worthy experiment. What is gratifying is that