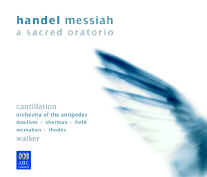 Personally, I’ve always found that reviewing a new recording of a work which is so well represented in the catalog can be at the same time both easy and difficult: easy because the vast multitude of recordings provides a broad baseline from which to make future comparisons, and difficult because one can be overwhelmed by over-familiarity to the work, even leading to a certain weariness of the spirit, which makes an objective audition to the newcomer a challenge.

Therefore, it was a pleasant surprise and no small amount of pleasure when this set was dropped my way this glorious music is kind on the ears. On paper, this performance has a strong cast, and boy do they deliver the goods. Tenor Paul McMahon and alto Alexandra Sherman turn in unfussy, elegant performances, tinged with the occasional tasteful ornament (just listen to McMahon’s extemporizing in the opening Comfort ye), and countertenor Christopher Field sings with a very sweet-toned timbre with bags of dexterity as well, as evidenced by his vocal acrobatics in ‘But who may abide’. Both he and Teddy Tahu Rhodes have a lovely duet in ‘O death, where is thy sting?’ which, thanks to Antony Walker’s sympathetic tempi, segues smoothly into the chorus ‘But thanks be to God.’

Teddy Tahu Rhodes, characteristically, sings quite a bit from the back of the throat, but his control, as always, is unfailingly precise, pushing easily into high notes and difficult long[] phrases without “squeezing” the timbre into ugliness, and he delivers the text with some conviction. Soprano Sara Macliver is also possessed of a gorgeously dulcet voice, carrying off the words with affecting empathy and consummate technique. She really makes the most of the soprano showpieces in Rejoice greatly and I know that my Redeemer liveth to leave her signature on this work as well.

I also appreciated the modest use of period forces in Antony Walker’s thought-out approach. Defining what is the “authentic” performance of Messiah is largely a chimera for the main reason that no such thing exists, for in the years between the work’s premire in 1759 and Handel’s death, the composer constantly revised and modified the work. In the 30 or so performances which he conducted, Handel reworked the orchestration and parts to suit the demands (or shortfalls) of the musicians and singers on specific occasions. There are sufficient historic records today to reconstruct a “snapshot” of its first performance, as well as any number of subsequent Handel-led performances, but in view of his constant tweaking, it would be presumptuous (if not impossible) to infer which version Handel himself preferred and assert that one of them unswervingly realizes his own intentions.

This recording thus adopts the empirical view of making a reasonably informed decision: together with the five aforementioned soloists, the youngish (established in 2001) choir Cantillation and Sydney-based early music ensemble Orchestra of the Antipodes (cool name!) does it here with 25 singers and an equally-balanced number of instrumentalists (5-4-3-2-1 on strings, with doubled oboes and trumpets, single bassoon, timpani, harpsichord and organ). It says in the lavishly designed and full-colour sleeve booklet – another big plus point with these ABC Classics releases that these are played on period instruments, but yet there is none of the abrasive sonority so commonly associated with this style of playing.

The modest size of the choir and instrumentalists means that their massed sound in the big numbers still retains a degree of luminous translucency, especially around the edges. The choral ensemble is not always the tidiest and a broader degree of dynamics would have shaped the music better, but this is not to take anything away from what Walker has achieved with the group in such a short time. Obviously he has done his homework, and there is little trace of the routine in his conducting; even the cliched Hallelujah! chorus rolls along swimmingly at a sprightly tempo, unlike on many other recordings where it sounds as if the choir is simply being led loudly and bombastically through its paces.

The immediacy of the sound – bright, broad and spacious – is abundantly clear from the very first notes to the very last ones, recorded in the vividly dimensional acoustic of the Cardinal Cerretti Memorial Chapel in the northern Sydney suburb of Manly. Vigorously sung and intelligently interpreted, ABC Classics’ flagship recording of Handel’s Messiah is clearly a labour of love by producers, performers and conductor alike, and it shows. Don’t let the unfamiliarity of these names fool you: this is a magnificently invigorating Messiah which is by no means outclassed by any of the ‘brand’ names on the market.

In addition to this double CD complete set, there is also a highlights disc (ABC Classics 980 046-9), as well as the DVD (ABC Classics 472 604-9). More recently, ABC has also released a three-disc commentary set by Graham Abbott (ABC Classics 476 289-0), based on Abbott’s 2004 radio broadcasts, which introduced Handel’s Messiah on the “Keys to Learning” program.

Where can I order a copy of the Messiah discussed in this article? I have viewed several clips from it on You Tube and Amazon does not have it in stock. Please let me know where i might purchse a copy of the CDs. Bruce Edwards