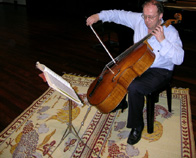 Solo cello works by Bach and other composers

If you’re on the Angkor trail and find yourself with some free time on a Saturday, make your way down to the children’s hospital for Dr Beatocello’s solo cello recital. Perhaps a more accurate description would be a monologue punctuated by short solo cello pieces.

It seems churlish to be reviewing a concert whose intentions seem to be nothing but charitable, but review it I shall. Despite his best intentions, Mr Richner’s playing is not the reason you should go to this ‘concert’. His Italian cello reasonates magnificently in the air conditioned hall where he holds his lectures, but his Bach (he played mainly excerpts from the fifth suite as well as a short piece by Pablo Casals, Chant d’oiseaux) featured tenuous intonation, a lack of awareness of barlines and brusque phrasing. His Bruch Kol Nidre, unaccompanied, was rushed and with little to savour.

But if you went to Mr Beat Richner’s concert expecting, well, concert-quality renditions of your favourite pieces, then you’d be missing the point. As head of Cambodia’s children hospital chain Kantha Bopha, which astonishingly treats all for free, it’s a wonder that he manages to keep his weekly appointment at the hospital with the tourists flocking to see Angkor Wat at all.

Go, rather, to learn more about the plight of Cambodian children, the high rates of HIV and tuberculosis that is rampant there, with high mortality rates and risks of disability that result from relatively easy-to-treat diseases like pneumonia. Dr Richner, who has been head of the
chain since 1992, explains, not without
considerable charm, how your dollar can help.

A short film tells you how more than 99% of children in Cambodia will not be able to afford basic healthcare services. While you might not agree with his musical interpretations, Dr Richner’s heart is in its right place and a small donation goes a
long way to helping these kids have a future – far further than you might expect in a country whose average income is fifty US cents a day.

Go, and leave a few dollars poorer – you’ll feel much happier having benefited Cambodia’s young ones, I promise.