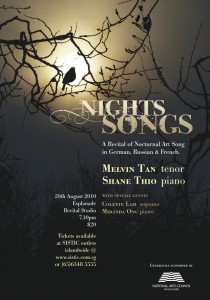 While titling the recital “Night Songs” might not have addressed any real thematic unity between the pieces, this  selection shared between tenor and soprano reflected a broad range of post-Romantic song, and threw up much relevant material to answer the question: where might the lied develop after Schubert and Schumann? Provocative programming indeed. Art song aficionados have had a mini-cornucopia in the last fortnight, with two recent recitals by proteges of Jeong Ae Ree. David and Jonathan Charles Tay, twin tenors studying at the Manhattan School of Music collaborated on an English programme around Vaughan William’s On Wenlock Edge (also the centerpiece of Mr Tan’s previous recital last year), followed by Brendan Keefe Au with Lim Yanting in a mixed recital titled “L’Heure Exquise”.  But it was the last of these, the recital under review, which had the most stimulating selection: Berg’s seminal Sieben frühe lieder (Seven early songs), Korngold’s little known Abschiedslieder (Songs of Farewell) and six romances by Rachmaninoff’s (opus 38) sung by London-trained Melvin Tan. His classmate at the Academy Hong Kong-born Collette Lam provided both vocal and repertorial contrast with the charming and unduly neglected Banalités by Poulenc.

Mr Tan’s voice was self-assured and technically secure, a focussed tenor with a convincing messa di voce in the upper register. Shane Thio, veteran local accompanist, unfortunately played very much a secondary role, which in such repertoire was less than ideal. The spare texture of the accompaniment to the Berg songs could have done with more intensity in the vein of playing the Berg Piano Sonata, each note being freighted with so much importance. One had the sense Mr Tan took this very much as a singer’s recital, to the detriment of the delicate balance between pianist and vocalist, and even leading to issues with chromatic stability in the more harmonically adventurous pieces. Miranda Ong, Ms Lam’s accompanist brought out much more vivid colours from the Steinway.  Despite struggling against the quite unsuitable acoustic in the Esplanade recital hall, the arpeggiated responds in Beau Soir conjured orchestral sonorities by the composer of La Mer. Ms Lam’s mature soprano exhibited a satsifyingly varied tonal palette, from full-voiced laments to coquettish sotto voce asides, absolutely critical in the French repertoire.

While the Berg cycle may have proved a little astringent, the Korngold was lushly tuneful and clearly much loved by the tenor. In pre-recital publicity on Facebook, he wrote that rehearsals were “almost getting to the point where I DON’T burst into tears at the end of the Korngold”. Irving Kolodin’s assessment of Korngold’s violin concerto as being “more corn than gold” unfortunately comes too easily to mind and perhaps unfairly shapes popular opinion. As to whether the tinge of Hollywood schmalz from this film composer is agreeable, chacun à son goût. The most rewarding choice of repertoire for Mr Tan was the Rachmaninoff cycle. Like most Russian art song,  it uses the rich tradition of folk music to bring very much aria-like works as a salon vehicle for grand Muscovite and Petersburger opera singers between productions. A recessed accompaniment was no impediment to enjoying these, as Mr Tan’s eager, youthful intensity handled the lyrical turns with aplomb. His simple heartfelt vocalism perfectly matched the straightforward depictions of countryside love à la Russe. Also, plaudits for handling the multilingual programme admirably, with careful enunciation complementing projected translations. Even without the original text, being able to make out most of the words (at least in the German and French that I could follow) was most commendable. Ms Lam suffered by comparison with her less than fluent diction, most obvious in the Noël Coward duet performed as an encore.

Coming out after the intermission in a dazzlingly spangly outfit he dubbed his “go-go boy shirt”,  Mr Tan continued the exploration of post-Romantic song with the a pair of Strauss lieder. As the giant of the fin de siècle German musical world, Berg and Korngold may be best seen from his vantage: increasing chromaticism providing more musical variety than Schubert while maintaining the intensely moving vocal lines, written very much with the singer in mind. However, the demands Strauss makes are high: one thinks of the many less than convincing performances of the Vier letzte Lieder, requiring a Gundula Janowitz to do them justice with a full-bodied, dramatic instrument managed with delicate subtlety and Viennese charm.

Ms Lam’s rendition of Banalitès was delightful, with her relaxed yet expressive demeanour, together with varied and well-projected use of formant resonances.  Sustaining musical interest through the protean moods of the songs, her greater stage experience came across, having performed roles from Handel and Purcell to Offenbach and Meyerbeer. The attempt at Gallic insouciance in taking a puff from a cigarette was unfortunately spoiled by the fact that it was not lit. Must bureaucratic venue regulations intrude in an otherwise harmless aesthetic venture? Poulenc represents the high-society mélodie edging towards and learning a little je ne sais quoi from the more music hall chanson, though always with an ironic cock of the hat. This Prevertian narrowing of the gap continues in Anglo-American song, such as the cabaret-influenced numbers by Britten and Bolcolm, which would have been welcome as a close to the programme.

The full force of Mr Tan’s personality came through with the first of two encores: Ivor Novello’s wartime “We’ll gather lilacs”, unabashedly indulging in its sentimentality and garnering a suitably effusive response from the audience. Noël Coward’s duet “I’ll see you again” from the operetta, and later film, “Bitter Sweet” concluded the evening in the same vein — light opera seems to suit Mr Tan well; Gilbert and Sullivan in Singapore, anyone?

Hello wanted to give you a brief manages and let you know a number of the pictures aren’t loading properly. I’m not sure why however i think its a linking issue. I’ve tried it in two different browsers and both show the same outcome.