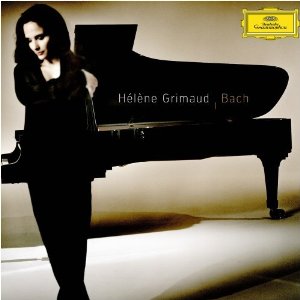 Like Glenn Gould, Helene Grimaud plays Bach with rhythmic sureness and extreme clarity of articulation. One could almost imagine old J.S. himself swaying animatedly to Grimaud’s playing with a smile on his face. Unlike Gould, she performs transcriptions of Bach’s music as well as “pure” Bach. She also has a tendency to program the pieces the presents on her discs. In this case, she prefaces each of the transcriptions (including one concerto Bach wrote originally for violin) with a prelude and fugue in the same key from The Well-Tempered Clavier. As she mentions in the liner notes, Grimaud’s intent is to show the universality of Bach’s music by supplying works from a variety of sources.

For the most part, Grimaud is successful in bringing together a program that teases the ear and the mind, though I suspect purists will need to adjust their expectations a bit. After an initial feeling an uncertainty, I found the mix of transcriptions and original worked fairly well in general. There are some problems, however. Having a concerto come after four solo pieces, only to disappear in a sea of more solo works, was disconcerting. A better orchestra might have helped (Die Deutsche Kammerphilharmonie Bremen sounds rather scrawny), and having them recorded well in the background to Grimaud’s forward-miked piano defeated the purpose of having an orchestral work on the disc in the first place. The D minor Chaconne is willfully distended in an attempt to add contrast between sections and feels inorganic, and why end the program with Rachmaninov’s transcription of the E major Violin Prelude, usually a piece that opens a recital?

On a positive note, Grimaud’s Well-Tempered selections are crisply played, and she projects a fair amount of Romantic mystery and fantasy in the Bach-Liszt A minor Prelude and Fugue. (I wouldn’t mind hearing her in his transcription of the Sarabande and Chaconne from Handel’s Almira.) Moreover, the program shows more careful forethought and preparation than many other pianists might give; even if some might condemn it for pretentiousness or simple wrong-headedness, it at least shows that Grimaud has a head and she has no hesitation in using it. With repeated listening, the relationship between various pieces becomes more apparent and welcome, and the more appealing aspects of Grimaud’s playing win out.

A mixed bag, but an interesting one nonetheless.