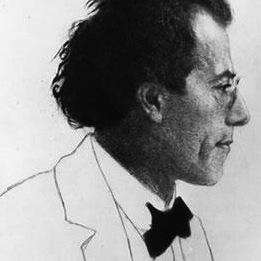 150 years after his birth (7 July 1860), and 100 years after his death (1911), it’s become a bit boring to quote the man himself when he said that his time would come, or, with much more flavour in its original German ‘Meine Zeit wird kommen’. But it has, and with a vengeance – every orchestra, major or otherwise, with or without a conductor sympathetic to his music, is putting up at least a couple of his symphonies in their season.

I’m really a young listener when it comes to Mahler – some have been listening to his symphonies since I before I was born (1978, in case anyone’s innerested). But I still remember the times where every time the Singapore Symphony Orchestra played one of his symphonies, it was a local premiere, and it was so hard to get hold of CDs that I had to keep calling up the local Tower Records at Pacific Plaza (still the epitome of a record shop, to me), to get hold of a recording of Bernstein’s recording of the Fifth Symphony with the Vienna Philharmonic. Perhaps it’s imprinting, or something else, but the following recordings of the symphonies (yes, I love them all) remain my go-to performances whenever I’m in need of a Mahler-break. Or should that be Mahler-zeit?

First Symphony.
Bavarian Radio Symphony Orchestra with Rafael Kubelik
This recording ties with probably the one with the Royal Concertgebouw Orchestra and Bernstein as being one of my absolute favourites. Mahler’s first symphony is full of its Naturlaut and Wunderhorn themes that it’s easy to forget that this was the work of a man in his late twenties, but it’s so full of youth, and yet so accomplished for a first symphony.  Both have such youthful, passionate playing that you’re constantly reminded of it. Mitropoulos and the Minneapolis Symphony Orchestra has craggy, craggy playing from the double bass, and you’re constantly reminded of the way in which Mahler tried to set himself apart from everyone else. The NDR Symphony with Kyrill Kondrashin, performed just before his death, is also not to be missed – real drama in every corner. As you can tell, this symphony has been very lucky on disc.

Second Symphony.
The second is problematic in its large scale, and as far as I’m concerned no one beats the Vienna State Opera Orchestra (a.k.a. the Vienna Philharmonic) under Hermann Scherchen (no longer available, and hard to find) in his grasp of the piece. It’s all in the cosmic nature of the final choral movement, and to do with its pacing. Scherchen really has to be experienced. Another one where the gates of heaven seem to be shaken and opened is the live recording with John Barbirolli and the Stuttgart Radio Symphony Orchestra, with Helen Donath and Birgit Finnila as the superb soloists. Mahler’s music doesn’t get much more exciting than in this finale, and I’m afraid when I go back to the old Klemperer EMI recording that it just seems too laid back for me.

Third Symphony
Everyone seems to love Horenstein, but I find him too laid back. I loved (and still love) Salonen’s recording with the Los Angeles Philharmonic Orchestra, and Bernstein’s first Sony recording with the NYPO for their sheer vigour, especially in the first movement’s drama (how I love that series of marches and their vulgarness!). At different times I also enjoy Bernard Haitink with the Chicago Symphony Orchestra (a live recording on the CSO label), as well as Bruno Maderna with the Milan Radio Orchestra that’s so raggedly played but captures the real spirit of the work, which is more than I can say about the mummified studio-perfect ones we hear nowadays. The melody of the last movement was sent directly from God, and is so emotional that I have difficulty listening to it without tearing up.

Fourth Symphony
I’m rather cool toward this work now, but one that continues to get me is Benjamin Britten’s remarkable performance with the London Symphony Orchestra.

Fifth Symphony
I used to adore listening to this, and given the right mood, I still do. Bernstein’s has too much drama, Abbado with the Berlin Philharmonic is perfectly recorded and balanced, in his inimitable way. An early aircheck with the BBC Symphony and Pierre Boulez is like taking a time machine back to the era where a Mahler tradition was still being created. If there were a live Barbirolli that would probably be perfect, but his studio recording is really marred by the last movement’s stodginess. I think this symphony really has to be heard live for the drama to come across.

Sixth Symphony
There are so many ways of playing this symphony. I prefer mine taken a little broad, with Barbirolli’s performance with the New Philharmonia Orchestra at the top of my list. I know the first movement is too slow, but there’s such a tread of doom about it; nothing else is quite like it. Mitropoulos with the NYPO is also crushing in its tragedy. By the way, I like the Scherzo first, then the Andante.

Seventh Symphony
One of my favourites in the whole cycle. I find myself thinking more and more that the one with Bernstein and the NYPO in the earlier Sony cycle is perfection – perfectly paced, perfectly recorded, no histrionics, with lovely playing from all sections of the orchestra. When I’m in a rebellious mood, Scherchen with the Toronto Symphony is so loose-limbed that it’s like watching a car-crash – you can’t peel your eyes away. But it ultimately hangs together. I still haven’t figured out if I’m supposed to cheer at the end of this. Evidently Mahler thought so – he described this as a popular piece.

Eighth Symphony.
Joseph Keilberth leads a performance of this symphony with the Wiener Symphoniker that has all the greats, including Fritz Wunderlich singing the tenor parts. Wilma Lipp, Hildegard Rössel-Majdan, Hermann Prey, Otto Edelmann sing their hearts out, and there is great theatre here, a little like Verdi’s Requiem. The live performance with the Vienna Philharmonic under Dmitri Mitropoulos is like wise great theatre, with one of the great Mahlerians at the helm, this can’t be heard too often. If you want to hear every last detail, try Solti. Another live performance (this symphony really feeds off ‘live’ energy), is Horenstein.

Das Lied von der Erde
Get past the German, and this work will comfort you, challenge you and work you to tears for the rest of your life. It’s the reason I learnt German – I wanted to appreciate it without a language barrier (I got as far as memorizing the songs, and a bit more, but that’s another story). I love, love Horenstein’s with Alfreda Hodgson and John Mitchinson. I hadn’t understood the work and just listened through it previously. One night I sat in my room, put on this recording and followed every word, every lyric.  I wept.

Ninth Symphony
Try Klemperer’s live recording with the Vienna Philharmonic Orchestra to understand the breadth of this work’s greatness. The London Symphony performance with Jascha Horenstein is idiosyncratic, but the man truly had a singular vision of this work.

Tenth Symphony
For a performing edition/version of this incomplete symphony, no one beats Rattle and the Bournemouth Symphony Orchestra; the Berlin Philharmonic one is a disappointment and a setback. For the Adagio alone, again, you can’t go wrong with Mitropoulos for an absolutely terrifying vision.

As a closing note, I’d like to wish every one a Happy Mahler Day, wherever you are on your journey with his music. If you have any of your favourite recommendations, or comments, please do post them below too!