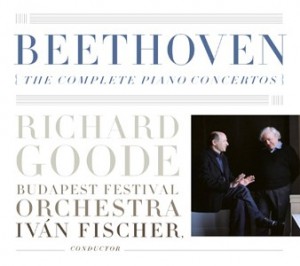 These well-behaved performances of Beethoven’s Five – corestones of any concert pianist’s repertoire – are musicianly and sensitive renditions – to a fault.

The recordings fare well as a set of the concertos, with generally sensitive, well-played contributions from Ivan Fischer’s accomplished Budapest Festival Orchestra. They impress with punchy winds, incisive, not overly-heavy playing, and some very attractively articulate strings, especially in the slow movements, essentially big-band Beethoven still but touched with a historically informed classicism.

Goode’s vision of the first and second concertos is rather more Mozartian, as is ‘correct’ nowadays, but I found his performances more placid than temperamental, less playful than it could definitely have been especially in the finales of the concertos, where the dance rhythms are however nicely taken advantage of. In the third concerto, there could have been a bit more emphasis on the Sturm und Drang aspect of the music, and there could have been more play in the dialogue between the winds and piano.

The fourth concerto comes off the best in this set, with the first movement balancing propulsion for nuance, and achieving a degree of contemplation without being slow and boring.

If you want a set of recordings which you can enjoy over and over again, this, with its high level of musicianship throughout fares well, but if you have other individual recordings and are looking for something markedly different, then you may have to look elsewhere, including the period instrument performances with Lubin and Pinnock, to gain a different angle on the music. Goode’s playing, unfortunately is too self-effacing to bring out the revolutionary aspect of Beethoven in this music.