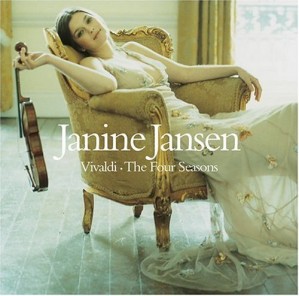 The world isn’t exactly lacking for recordings of Vivaldi’s popular tetralogy, ‘The Four Seasons’, so when the record companies trot out yet another with one of their new pretty faces slash talents, they’d better be offering something new for the seasoned collector.

Let it be said from the outset that Janine Jansen isn’t just another pretty face, pace the languid fashion magazine pose on the album cover (where she looks very, shall we say, enticing), having proven her musicality in her recordings of the Mendelssohn and Bruch as well as other concerti and her Bach Inventions and Sinfonias transcribed for strings.

Her ‘Four Seasons’, well-played and somewhat HIP influenced, while being extremely musical, doesn’t add anything groundbreaking to those already on disc. She takes solo strings, a theorbo, a harpsichord and an organ into her ensemble, but doesn’t use period instruments – a wise move, since that would pit her against the many existing period instrument versions already available.

She avoids extremes in tempi, and tempo fluctuations as well and ornamentation are safe and unremarkable. ‘Spring’ is pleasant and interestingly phrased in parts, with the musical dialogue between the ensemble members coming through nicely, while ‘Summer’ is not as hot or languid as it sometimes comes across in the period instrument recordings. ‘Autumn’ has some really interesting continuo (harpsichord) improvisation in the slow movement, Janine Jansen keeping her virtuosity and tricks firmly in her sleeve until the third movement where she shows off some quick fingerwork and interesting touches from the ensemble.

‘Winter’ is my favourite performance (and season) of the four, with more temperamental playing shown here than anywhere else, the winter wind really chilling, the second movement taken at quite a clip, much faster than the norm. After some of the somewhat effects-y playing offered by some of the period instrument groups (Fabio Biondi’s Four Seasons is extremely refreshing to the collector who’s grown tired of the traditional slow, big band versions but often mannered and over-the-top), Jansen’s firmly middle-of-the-road, highly musical approach comes as a relief. As a representation of Vivaldi’s freqently-played piece, it has a lot to recommend it, and it certainly gets my thumbs up.