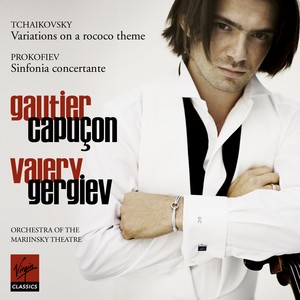 Both works presented here were persuasively shaped by their respective first soloists. Mstislav Rostropovich’s playing of Prokofiev’s First Cello Concerto in 1948 inspired the composer to expand and rewrite the work into the Sinfonia Concertante, and the cellist’s extensive technical advice over a two-year period of recomposition shaped that work considerably. As for Tchaikovsky’s Rococo Variations, Wilhelm Fitzenhagen meddled directly with the manuscript while the composer was fleeing from his marital crisis; he touched up the solo part, removed one variation and rearranged the work into the form known by audiences and cellists today. (Tchaikovsky’s original version was finally published in 1941, but the majority of cellists still play the Fitzenhagen version, including Gautier Capuçon in this recording.) Thus, these two pieces share a common bond, despite their stylistic and expressive differences. They also shared the stage of the Mariinsky Theater in Saint Petersburg, Russia on December 24, 2008, with Capuçon as soloist and Valery Gergiev (below) leading the Orchestra of the Mariinsky Theater, formerly known as the Kirov Orchestra. 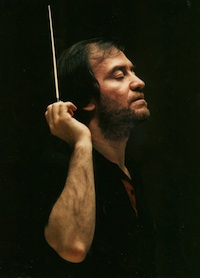 What a Christmas present the audience received that evening! The Tchaikovsky is given a performance that is by turns elegant and athletic, full of imaginative touches by soloist and orchestra alike. Capuçon experience as a chamber-music player for, among others, pianist Martha Argerich places him in good stead in a similar give-and-take with Gergiev and the orchestra; they constantly trade ideas back and forth, mirroring and openly communicating with each other. From the neo-classical brilliance of the Tchaikovsky, the tick-tock opening measures of the Prokofiev move us to the world of the composer’s ballets Cinderella and Romeo and Juliet. One of Prokofiev’s more imaginative scores, the Sinfonia Concertante is extremely demanding for the soloist. Throughout its roughly 40-minute length, he remains front-and-center throughout the proceedings, moving from moments of drama, dazzling technical display and lyric warmth in a constantly shifting musical landscape; one critic wrote that the piece demanded that the soloist be a great actor as well as an outstanding musician. No wonder Rostropovich practically owned the piece for as long as he played it. While the tone of Capuçon’s cello is sometimes a little light and gets lost once or twice in the orchestral fabric, he is fully up to the work’s technical and interpretive demands, and Gergiev is with him every step of the way. Highly recommended.