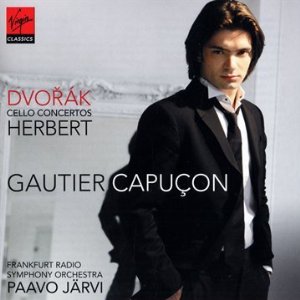 Pairing the Dvořák Cello Concerto with the Victor Herbert Second Cello Concerto is not a new idea (Yo-Yo Ma has the same coupling), but it is a good one. A friend of Dvořák known primarily as a composer of operettas (42 altogether, the best known of which is Babes in Toyland), Herbert wrote for several genres, including film music as early as 1916. His Second Cello Concerto inspired Dvorak to try his hand at a similar work, and the orchestration of the Herbert, which includes three trombones, gave him some ideas on scoring. Gautier Capucon and Paavo Järvi give the Herbert a well-paced reading, spirited in its outer movements and deeply heartfelt in its central andante. It is the kind of performance that can make a listener wonder why this piece has been relatively neglected.

However, the Dvořák will be the main reason for many people to get this disc, and there are two drawbacks. The first is a tendency to segment the concerto into smaller bits, as though to emphasize by slowing way down that this is the lyric second theme of the first movement, or by speeding up that this is the fiery development section. The concerto does not take well to such treatment and, as a result, does not hold together structurally as well as it should. The second problem, which is related, is a penchant for hanging fire at several points in the outer movements. The best moments are the quieter ones, with Capucon giving us considerable poetry and finesse, appropriate in a work so filled with longing and nostalgia. But as widely known as the Dvořák is as the cello concerto, the market is glutted and this performance’s finer points are not enough to raise it to the top of the heap.

Recommended for the Herbert, which makes for an attractive and unusual coupling.