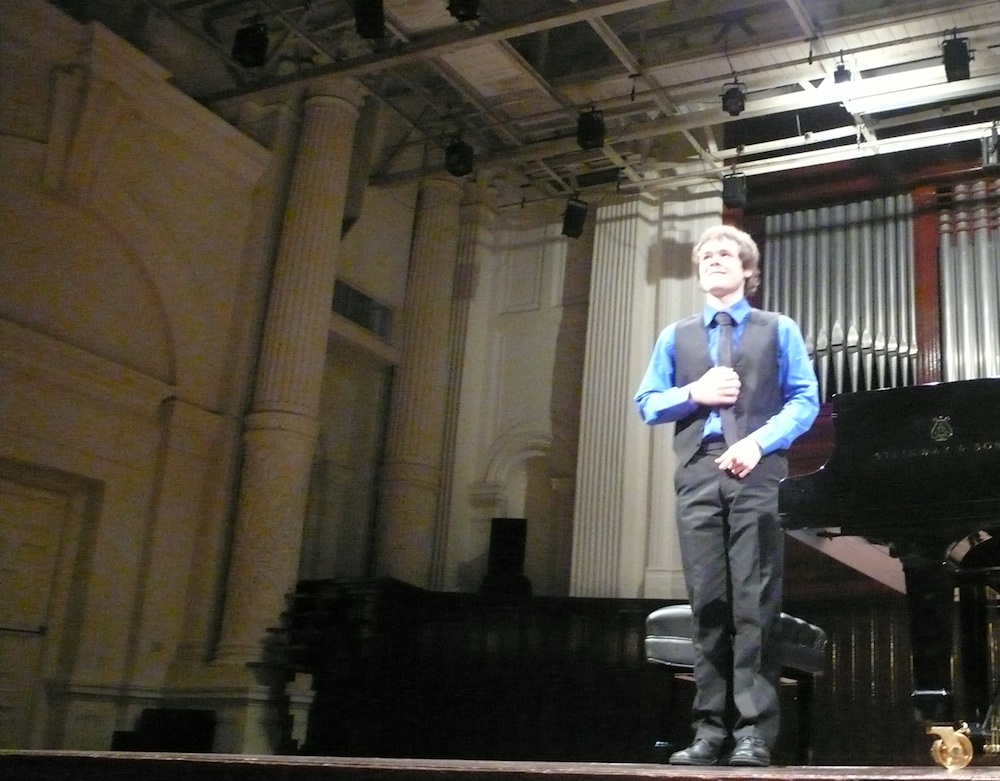 In my other job writing for Time Out Singapore’s classical music section, I chose this concert, out of the four nights presented in this year’s, the 17th CIMB Singapore International Piano Festival, as the one to watch. To a large extent, I was right, but then again, it wasn’t a difficult decision to make.

The pianist in question, the English teenager Benjamin Grosvenor, as old as the piano festival he was making his Singapore debut in, is possibly the youngest to have ever played in it as an international invited guest. To say that he can grow in his performance is not to denigrate or indeed depreciate his achievement tonight; for even though the most splendid musicians must either grow or stagnate, and the potential that Benjamin Grosvenor shows nothing short of stunning. As it is, his performances of the two larger works, the Liszt sonata and Ravel’s Gaspard de la nuit held their own with any of his older colleagues.

He opened his recital with three Concert Etudes by Nikolai Kapustin, technically challenging pieces that he also recorded in his debut album ‘This and That’. Dressed in a cyan shirt, a vest and dark pants, he walked confidently to the piano, bowing to greet the audience before sitting down to blow them away with these jazz-influenced miniatures. His obvious familiarity with the music resulted in easy, free-flowing accounts that charmed and entertained, with the technical difficulties melting away in his ten fingers.
His next piece, the mighty Liszt sonata is a work that is oft played, yet a complete grasp of it eludes even some of the most accomplished pianists. In Benjamin’s performance, he chose a fleet pace (think Pletnev, Argerich) in favour of the more ruminative approach of Richter, Arrau et al, with plenty of colours and a fine, full tone in Liszt’s more orchestrally-conceived passages, without losing sight of characterization of Liszt’s themes.
The first two “movements”, in as much as one can call them that, were beautifully paced, with lots of attention to voicing throughout. If certain sections, such as the ‘Grandioso’ theme were slightly glossed over in favour of forward propulsion, at least the other themes made their impression well-felt. In some of the more quasi-improvisatory phrases that Liszt revelled in, Benjamin took a fleet Horowitzian staccato-like that was at same time reminiscent of the Kapustin Etudes in the freeness that he invested in them.
The slower sections displayed a poetry that I wasn’t sure a seventeen year old would be able to express, but with a singing cantilena that rose to operatic heights, it elicited tears from some members of the audience, including this one. With a firm grasp of agogic variations in tempo, his phrasing constantly ravished and left one wondering how a person as young as he could have had the experience needed to express effectively what Liszt had taken so many years of life to transform into music. What’s more the wonder is that it never became sentimental or soggy, with a remarkable restraint for such a young musician.
The final movement, beginning at the double fugue from Allegro energico, did not, however, sustain the pace that he had set in the first two and it was here that tension started to flag. Perhaps tiredness was setting in, but the difficulty in keeping the work sounding more than a series of episodes of cascading octaves and fearsome octave prestissimos – a problem that is, after-all, part of the fabric of this music – showed. For now, the scope and structure of the last bit of this sometimes sprawling masterpiece seems just out of his grasp, at least in this performance. First two thirds – stunning. Last third, technically polished, but not yet in the league of the masters.
After the interval, Benjamin played two Chopin nocturnes, both well-known – the luscious F-sharp major and melancholy C-sharp minor posthumous nocturne, as well as an imaginative third Scherzo in an account that in some places seemed short on power, then plunged into Ravel’s Gaspard de la Nuit.
In Ondine, Benjamin painted in limpid tones and in a taut account the playful water nymph, with already expert use of the sustain pedal, bringing out perhaps a darker side of Ravel’s quasi sonata. Perhaps the opening figurations were a little literal, but in terms of clean playing and bringing out the liquid, fluid, tones that Ravel was trying to write into music, his account was satisfying in itself, setting the stage nicely for Le gibet, or The Gallows.
In this, Benjamin showed his again already-developed control of his ten digits, bringing forth a depiction of the dead hanged man swinging in the foreground. If his bells tolling from the village seemed a little foreward and near, they were absolutely evenly played throughout Ravel’s mysterious, seductive chord sequences, a challenge that pianists struggle to match up to. His grasp of colour and use of the pedals were here, again, masterly.
Only in Scarbo did Benjamin come across as a little reserved. Though there were moments of fire in his portrayal of Ravel’s malevolent goblin, there was a certain hesitancy in what is after all one of the most difficult piano music ever written informed his playing. Then again, this is tricky music to perform, and if he was a bit careful, who’s to blame him? It was note-perfect, if again a bit diffuse and lacking that inevitability that comes with the most satisfying accounts. Still, it was a fine performance of a well-nigh impossible piece.
As an encore at the end of what must have been a tiring evening, he attacked Strauss-Cziffra’s Trish Trash Polka – a compendium of a pianist’s worst nightmares that tries to squeeze as many notes as possible on a single page – with a verve that left one wondering if he would (as a certain other pianist many years ago did) play a whole concert again, such was the energy. Benjamin Grosvenor has so much potential – and a fine career ahead of him. Let’s hope he doesn’t burn out, like so many prodigies do. In the meantime, I’m quite sure that years down, I’ll remember this concert and tell people that I was there when Benjamin Grosvenor first came to Singapore and played his daring debut recital.